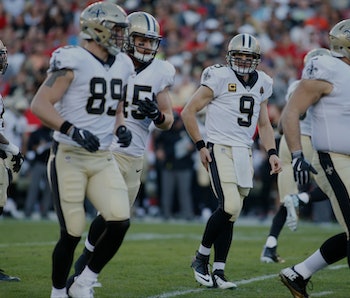 The New Orleans Saints reversed three straight years of 7-9 finishes by going 11-5 and winning the NFC South. Key to their success were a pair of victories over the rival Carolina Panthers, who they now meet in the first round. A hive mind of about 50 NFL fans predicts the Saints will win Sunday.

While there’s a longstanding notion that it’s hard for a team to beat another three times in the same season, the reality makes more intuitive sense: The team that has already proven it’s better twice has won the third game in 11 out of 16 such contests all-time. That’s good news for the Saints, who can also point to the fact they beat the Panthers 34-13 early in the season and 31-21 in December. Then again, the closer outcome was actually the more recent game in New Orleans, so perhaps the advantage for the Saints isn’t that pronounced.

Still, this is the playoff debut for the new-look Saints, who have deemphasized the role of Hall of Fame quarterback Drew Brees in favor of a stout defense and powerful running attack. The Panthers, who are also making their return to the playoffs after a year away, hope that their own star quarterback Cam Newton can put things together after a season that never quite snapped into focus for him. This team was good enough to hand the Minnesota Vikings and New England Patriots rare losses, so perhaps they have what it takes to at last break through.

The hive mind predicts the Saints will win, albeit with low confidence and 83 percent brainpower behind the pick. Still, a lot of the dissent is for the Saints with high confidence.

The swarm predicts the Saints will win by seven to nine points, with 82 percent brainpower behind the pick. Vegas favors New Orleans by a touchdown.