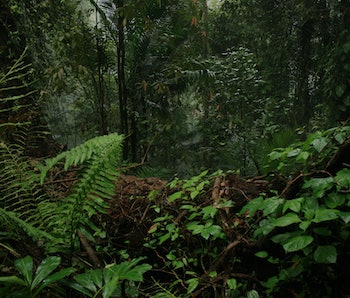 Ecosystems thrive when there’s an abundance of organisms capable of performing unique functions and filling different niches. A rudimentary picture of this would be how plants use sunlight and water and nutrients to grow, herbivores eat the plants, carnivores eat the herbivores, and fungi decompose all the dead matter back into nutrients for the plants to use. Some organisms perform the same function, like consuming the same prey, and directly compete against each other for this role. Scientists describe this richness of species as “biodiversity,” but have always struggled to make full sense of its complexity, and reconcile some of the paradoxical effects of biodiversity.

One of these major questions is what’s known as the diversity paradox: Why one superior species doesn’t out-compete all of its biological neighbors and drive them to extinction. Scientists might finally have a resolution to this riddle. In a paper published December 28 in the journal Physical Review Letters, physics professor Nigel Goldenfield, Ph.D. and his graduate student Chi Xue, both at Carl R. Woese Institute for Genomic Biology at the University of Illinois at Urbana-Champaign, investigate the diversity paradox through an arms-race of microbial menaces.

Using the example of viruses that prey on bacteria, Goldenfield and Xue show how predator and prey compete to out-wit one another. Bacteria evolve better defenses to withstand viral attack, and viruses develop ways to overcome those defenses. The better the virus is at adapting as a predator, the more likely it is to decimate its prey — and therefore itself. This phenomenon is called “Kill the Winner,” and Goldenfield and Xue say it could resolve the diversity paradox.

If Wile E. Coyote was actually a successful predator, it would drive both itself and the Road Runner to extinction. This dynamic is one that Goldenfield examined in the virus-bacteria relationship, bringing into account factors like random population growth. He and Xue developed a so-called stochastic model that attempts to capture some of the randomnesses of nature to make a computer simulation more realistic.

Using the marine biology example of plankton, which is composed of bacteria, algae, protozoa, and other microorganisms, Goldenfield and Xue show how viruses keep competing members of a community under control. In short, they argue that there is no such thing as a “steady state” for an ecological community and that it’s always in flux. For example, as one protozoan species grows in population, its host-specific virus has more prey. Therefore, the population of that protozoan species goes back down, leaving more resources for its bacterium neighbor, which then experiences a similar boom and bust with its host-specific virus.

“Our results strongly suggest that diversity reflects the dynamical interplay between ecological and evolutionary processes, and is driven by how far the system is from an equilibrium ecological state (as could be quantified by deviations from detailed balance),” Goldenfield and Xue write.

Their model, which they call the Coevolving Kill the Winner model, accounts not just for ecology but also evolution, and they say it’s much more holistic than previous models that only account for resource use.

“Inside the bacterial community, different strains have distinct growth rates. They coexist, with no dominating winners, due to host-specific viruses controlling the corresponding strains. This results in two layers of coexistence through KtW dynamics (bacteria-plankton coexistence and bacterial strain coexistence), rested like Russian dolls.”

Is it a perfect solution? By no means. No computer model can capture all the complexity of a natural system. But this one bets a lot closer than previous efforts.