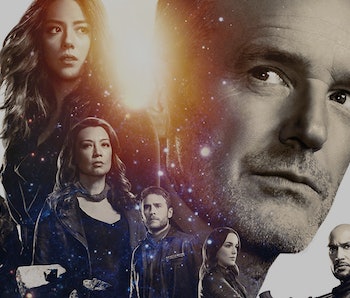 After rocketing 70 years into the future only to find that the human race has been enslaved by the Kree, it seemed like things couldn’t possibly get any worse for the Agents of SHIELD crew. Season 5 has already thrown its heroes for a loop — and things will only get more intense when the series returns tonight, Friday, January 5, after a brief winter hiatus with Episode 6, “Fun & Games.”

It’s important to know that Agent Phil Coulson himself, Clark Gregg, is making his SHIELD directorial debut with “Fun & Games” after starring in the series’ lead role for so long. Greg spoke with Entertainment Weekly about directing his first episode, revealing some details and a hint at what audiences should expect.

“It’s a bloody episode, with a bunch of people saying goodbye,” Gregg told EW in a story published Thursday. “I read it and I was squealing. ‘This is going to be fun!’ and it was… I wanted something kind of nuts and fun, and I think they forgot the kind of part because there are two crazy fights, and some really big moments between characters that we’ve all been with for almost 100 episodes.”

In the final episodes before the winter hiatus, “Rewind,” Iain De Caestecker’s Fitz arrived on the scene to pose as a bidder who wants to buy the Destroyer of Worlds (aka, Chloe Bennet’s Daisy). There’s also something pretty exciting about a “fight to the death” that we should all maybe be a little worried about.

The official synopsis for the episode is, “With Daisy’s life on the line, an unexpected friend attempts to rescue her.” It seems fair to assume that Fitz will be the “unexpected friend” and that he’ll have some help from Enoch (Joel Stoffer), who traveled through time alongside him. In the episode preview, Fitz and Enoch bicker about Fitz’s new alias up until Fitz sees Elizabeth Henstridge’s Simmons, enslaved by the Kree and rendered deaf so she can’t hear any of her friends.

The episode after “Fun & Games” is titled “Together or Not at All,” a title that doesn’t necessarily bode well for our heroes. Here’s hoping things go more smoothly for Fitz then they have in the past and that he’s able to work out a plan — world-ending prophecy be damned.