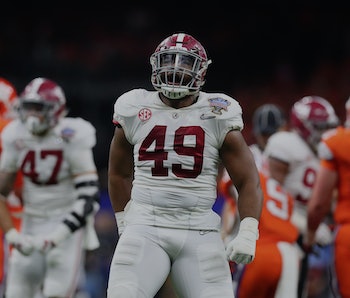 After one of the wildest college football seasons in a decade, the national championship comes down to an all-SEC matchup between the Alabama Crimson Tide and the Georgia Bulldogs. Which team will emerge victorious, and how will it play out? A hive mind of about 50 college football fans have all the predictions for the game.

Alabama is making its third straight appearance in the championship game and going for its incredible fifth title since 2009. They already vanquished the team that beat them last year by stomping the Clemson Tigers in the Sugar Bowl semifinal. Georgia, on the other hand, are coming off a wild double overtime victory in the Rose Bowl against the Oklahoma Sooners. The Bulldogs are aiming for their first title since 1980, as head coach Kirby Smart attempts to become the first former assistant of Alabama coach Nick Saban to beat his old boss.

Will the game Monday night in Atlanta recapture the magic of the last time these teams met in that stadium, the 2012 SEC Championship game that ended with Alabama surviving 32-28 after Georgia came up five yards short on the final play of the game? Or will it be more like the last all-SEC national championship game earlier in 2012 between Alabama and the LSU Tiger, in which Saban’s Crimson Tide slowly choked out LSU 21-0?

To predict the answer to that and other questions, Unanimous A.I. used what’s known as swarm intelligence to forecast how the game will play out. About 50 college football fans worked together as a hive mind to make predictions. As you can see in the animations below, each participant controlled a little golden magnet and used it to drag the puck toward the answer they thought was the most likely outcome. As the users saw the puck move toward a particular outcome, it triggers a psychological response. They readjust their decision-making, building toward a consensus. Here’s Unanimous A.I. founder Louis Rosenberg explaining swarm intelligence at a recent TEDx Talk.

This is an intriguing matchup, especially since Alabama’s loss to the Auburn Tigers in the Iron Bowl means they didn’t previously meet in the SEC Championship game. While the storyline of Saban vs. Smart has dominated headlines, the hive mind sees a less narrative-based element as crucial to the final result. The swarm predicts the matchup between Georgia’s two elite running backs, Nick Chubb and Sony Michel, and Alabama’s linebackers will tell the story of this game. The swarm isn’t absolutely certain, given there’s only 76 percent brainpower behind it, but it makes sense that the Bulldogs’ running back play will go a long ways to determining how well they can compete in the game.

Sure, Georgia literally just won a game 54-48, but it’s hard to see them repeating that tally against Alabama, who aren’t known for getting into wild shootouts. Though the Crimson Tide can get into higher-scoring games — their national championship contests against Clemson were a 45-40 win and a 35-31 loss, respectively — so the hive mind leaves a little wriggle room, making only a low confidence pick with 79 percent brainpower that the combined score will be 45 points or fewer. Whether that’s a 23-21 nail-biter or a 44-0 detonation is a different question, of course.

The hive mind figures this game will be a defensive struggle, which is certainly what both head coaches would want this to be. Given the swarm is saying this pick is only by a little and with 80 percent brainpower, we’re maybe not dealing with some 9-6 act of brutality like Alabama and LSU’s first game in the season they rematched for the national title, but something in that general vicinity. They’re not scoring more than 45 points combined, after all!

And here’s the big question: Who wins? Ultimately, the swarm goes with the reliable pick, choosing Alabama to once again emerge the national champion. But it’s only a low confidence pick made with 79 percent brainpower, so it’s not as though the hive mind is counting out the Bulldogs.

The game kicks off 8 p.m. Eastern Monday on ESPN.