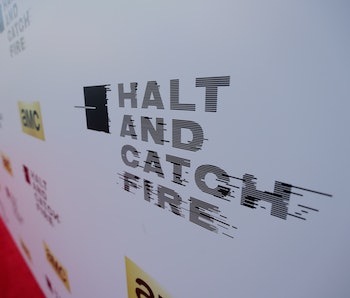 The situation at Mutiny isn’t going well. The company is strapped for cash, still reeling after Gordon’s coked-up “improvements” to their Tank game ruined customers’ computers. Tensions between Cameron and Donna are worsening. “Play with Friends” confronted all of these issues with Cameron having to tell the Mutiny staff that they’d have to pull their salaries, which resulted in a hopefully not permanent departure of the always-funny Yoyo. And after the mid-80s equivalent of pressing “Reply All” in a private message to Tom, Cameron’s bitter feelings to Donna and her family were made known to everyone.

Halt and Catch Fire’s first season was centered on the tension between Cameron’s lofty tech dreams, Gordon’s paranoia over failure and Joe’s aspirations of beating IBM. This season the dynamic is reversed with Cameron being the reasonable businesswoman and Donna with her Communities chat channels pushing an unproven computer program. The dynamic though familiar is a far more interesting than the nebbish nerd fight against the man in the suit. Mutiny, like its name implies, is without a real hierarchy, so the tensions between the leading women become a central part of the show. But they’re both too deep in Mutiny and their own respective ideas to leave behind the grimy tech frat house.

Nearly halfway into this season it remains funny just how minimized Joe and Gordon are in the show. Gordon is the supportive spouse who’s constantly tinkering on projects to expend all of the coked-up energy inside him. And Joe, while slowly planning a money-making project appears right now to be aiming relatively small, when the previous season he was ready to try and revolutionize personal computers. The two finally link back together in this episode, but Joe’s plan to find value in unused mainframes feel minor and after Gordon’s reluctance to join the scheme only furthers how little they play into the show’s big scheme.

Donna calls out Cameron for dismissing community channels because it isn’t her idea and that is the reason she doesn’t want to support it. It’s an odd, but personal, moment of selfishness from Cameron, who is usually motivated by finding ways to connect people. That is why during the great first person nerd gun sequence it’s immediately clear why she’d imagine of an online game where people shot each. The game offers a way to connect with friends, enemies or anyone in a way that before would just be solitary experience. That is the core of the rivalry between Cameron and Donna. Their disagreements are not simply over pride, it is arguing with how people should connect with each other with this brand new technology. The first season of the show was obsessed maybe even a bit too much with computer hardware, but now it’s wrestling with a base human struggle: How to connect with each other?