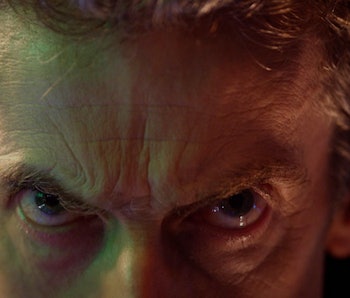 Before Peter Capaldi’s 12th Doctor was ever introduced, we’d already seen his eyebrows. In the 2013 Doctor Who mega-event “The Day of the Doctor,” the 12th Doctor flew to Gallifrey along with all the other versions of the Time Lord to save their home planet. It was a quick tease of what was then, the “new” Doctor. But, four years later, we never got to see how and when Capaldi’s Doctor participated in that big moment. Which is bizarre, because the most recent Christmas special created a perfect opportunity not only to explain it, but close another plot hole too.

So, will Jodie Whittaker’s 13th Doctor be saddled with explaining one nagging mystery left over from Matt Smith’s era? Let’s dig in.

Spoilers for Doctor Who “Twice Upon a Time” ahead.

For three seasons of Capaldi’s Doctor, fans hoped to have some kind of resolution on the whole Gallifrey plotline, for two reasons. First, “The Day of the Doctor” seemed to set up the search for Gallifrey as the Doctor’s new purpose in life. Second, it was always a little unclear as to why Doctors 1-8 knew to show up and help save the planet at that exact time. It was established that the War Doctor, the 10th Doctor, and the 11th Doctor hatched the plan, which reverberated back through time, but never explained how the 1st Doctor, and all the subsequent incarnations new about it. This makes “Twice Upon a Time” a little frustrating because not only was it Capaldi’s last outing as the Doctor — and the last chance to show him flying to Gallifrey — but it also included the 12th Doctor meeting the 1st Doctor. In theory, the plothole of the 1st Doctor knowing about the “Gallifrey Stands” plan could have been explained right here. But, in the episode, no mention of it is ever made, and both the 1st and 12th Doctors go on to regenerate right after they part ways.

Thematically, this worked within the context of “Twice Upon a Time.” Including a reference to the Time War or “The Day of the Doctor,” would have overstuffed the episode. But, it begs the question: will this ever get fixed?

Because the 1st Doctor was on death’s door in this episode, it makes sense he wasn’t at a time in his life to fly the TARDIS and help save Gallifrey. So, we have to assume he already had, and his memories of doing so were erased by the wonkiness of the time stream. “The Day of the Doctor” establishes that no one after the 11th Doctor will remember what they did that day, so that means the 1st Doctor must have done it at some point, and then forgotten about it.

But who told him? Which Doctor? While it’s unlikely that season 11 of Doctor Who will depict Jodie Whittaker writing a message on the psychic paper for William Harntell/David Bradley to read in the distant past, it would be extremely sweet if such a thing did happen. But for now, it seems the Time War is not only over, but officially, forgotten too.