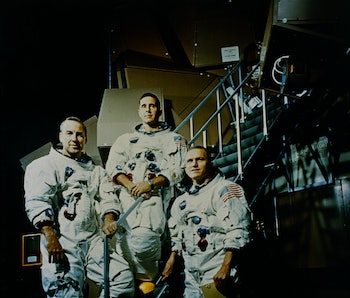 The holidays are a miserable time to travel, as literally anyone who has ever had to travel for the holidays can attest. But while the title of worst holiday travel story is a tie between several million people, there’s one clear winner for the best holiday travel ever: 49 years ago, three NASA astronauts celebrated Christmas by completing humanity’s first ever orbit of the moon and beginning to head back to Earth.

After the deadly fire during the testing of Apollo 1 led to several uncrewed launches, Apollo 8 was the program’s second crewed mission and the first ever to carry humans beyond Earth’s orbit. As December 25 dawned back on Earth, the astronauts were some 238,000 miles from home, meaning they really have to lay claim to the loneliest Christmas ever, with all due respect to all our earthbound existential crises.

Aboard Apollo 8 were Commander Frank Borman, Command Module Pilot James Lovell, and Lunar Module Pilot William Anders. Borman and Lovell had previously flown together on Gemini 7, which had come closer than any other NASA mission to ruining its crew’s Christmas plans when it flew from December 4 to 18, 1965.

On the last day of the lunar portion of mission, the astronauts received an appropriately festive greeting from Deke Slayton, NASA’s chief of astronauts.

“I just would like to wish you all a very Merry Christmas on behalf of everyone in the Control Center, and I’m sure everyone around the world,” said Slayton. “None of us ever expect to have a better Christmas present than this one.”

Harrison Schmitt, who would go on to be the last person to walk on the moon with Apollo 17, read the astronauts a spacey take on “Twas the Night Before Christmas.” Here’s the first verse, including a reference to then-NASA flight director Christopher Kraft, with the rest at the end of the bottom of this story.

Twas the night before Christmas and way out in space,

the Apollo 8 crew had just won the Moon race.

The head sets were hung by the consoles with care,

in hopes that Chris Kraft soon would be there.

By not long after 1 a.m. Eastern on Christmas Day, Apollo 8 had concluded its 10 lunar orbits and began its journey back to Earth. The astronauts had some fun with their yuletide visit, such as Lovell’s first message back to NASA after completing the necessary maneuvers for their return while on the far side of the moon: “Please be informed, there is a Santa Claus.”

During one of Apollo 8’s broadcasts back to Earth during its orbits, the astronauts offered this Christmas message, including a reading from Genesis.

The mission’s primary purpose was to demonstrate that Apollo could indeed reach the moon, orbit it, and return safely to Earth. After two more rehearsal missions with Apollo 9 and Apollo 10, the work Apollo 8 did during Christmas 1968 would pay off with Apollo 11’s landing just seven months later.

All three Apollo 8 astronauts had chances to return to the moon, but none quite worked out. Anders was the backup command module pilot for Michael Collins on Apollo 11, but Apollo 8 remained his only spaceflight. Borman reportedly was offered the commander position that ultimately became Neal Armstrong’s, but he turned it down and decided to retire instead. And Lovell is now perhaps the most famous Apollo astronaut outside of Armstrong and Buzz Aldrin, given his role as commander of the Apollo 13 mission that almost ended in catastrophe.

While some American astronauts have since spent Christmas in space while working on board the International Space Station, there’s only ever been one other NASA mission that ruined its crew’s yuletide plans: A 1999 mission of space shuttle Discovery is the other holiday-time mission.

And, as promised, here’s the rest of the Apollo 8 version of “Twas the Night Before Christmas,” full of all the impenetrable references you would expect from a NASA in-joke. 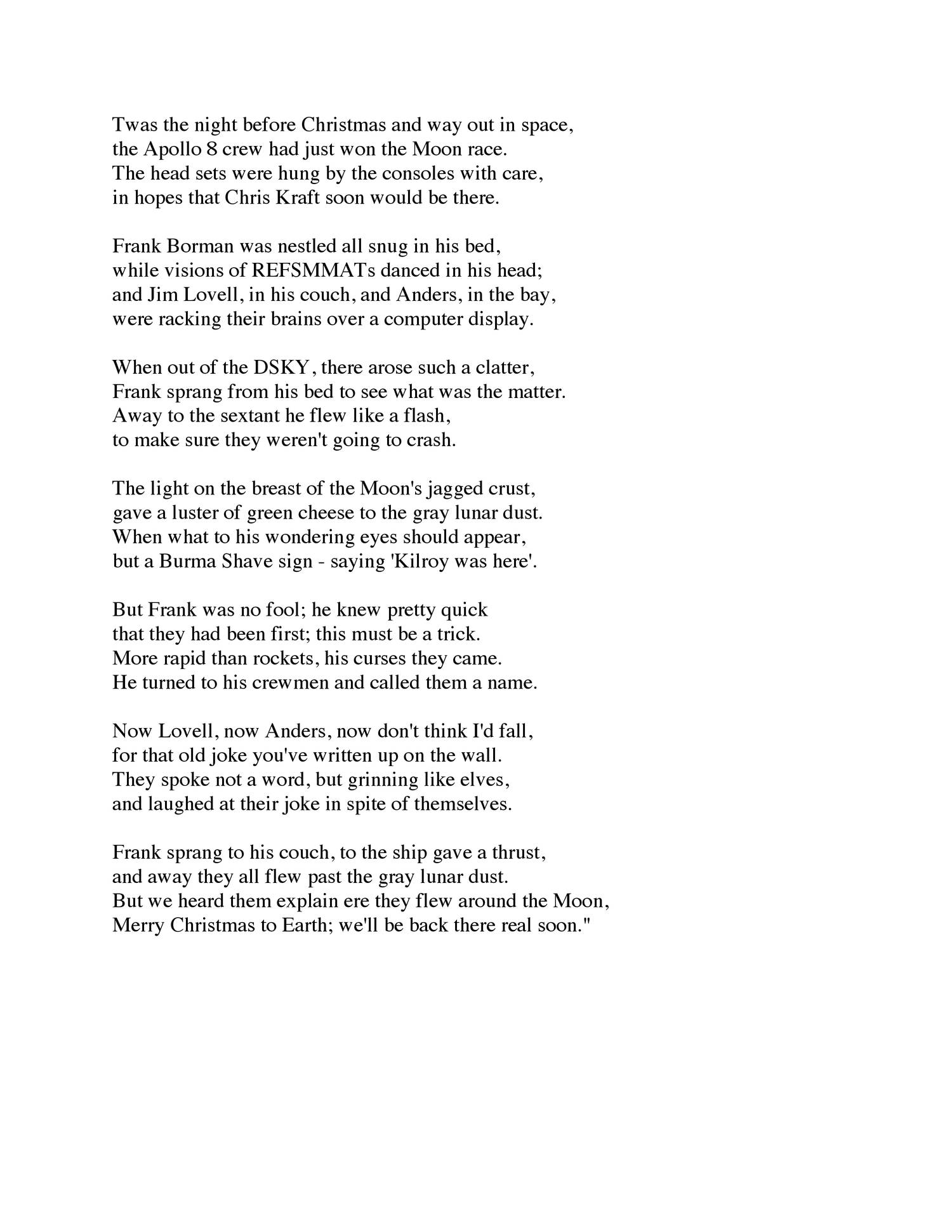 More like this
Innovation
Jan. 23, 2023
These 5 futuristic tech ideas could help us explore distant worlds
By Jennifer Walter
Science
Jan. 29, 2023
This nuclear-powered X-ray “flashlight” may help scientists probe the Moon for water
By Andy Tomaswick and Universe Today
Science
Jan. 25, 2023
NASA and DARPA want to build a nuclear-powered spaceship
By Kiona Smith
LEARN SOMETHING NEW EVERY DAY.
Related Tags
Share: