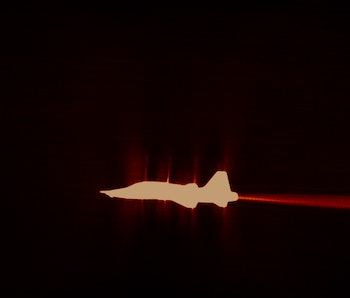 Not everything NASA does has to do with space — sometimes it likes to switch its focus to the “Aeronautics” part of the National Aeronautics and Space Administration. And aeronautics has rarely been cooler than this newly released photo of an Air Force jet as it moves from subsonic to supersonic speeds.

Well, technically speaking, the photos only show the outline of the jet, as the photo was snapped as the jet passed in front of the sun. That’s no accident, as researchers from NASA’s Armstrong Flight Research Center lined up the shot precisely so that it could take advantage of our star’s unique properties as a background. It’s a technique known as Schlieren photography, and it’s been used for more than 150 years to capture phenomena like supersonic motion.

The upshot of all this is that the researchers were able to photograph the shockwaves created as the jet breaks the sound barrier, which we on the ground here as a sonic boom. NASA is developing a Low Boom Flight Demonstration aircraft, or LBFD, that can reach supersonic speeds without creating that loud, disruptive bang, which has been the main reason supersonic flight remains banned over populated areas.

NASA released this video of the researchers getting ready to snap the photo.

The camera uses a special hydrogen alpha filter, which means it only sees particular wavelengths of light. In a statement, NASA researcher Mike Hill explained why the sun is so critical to getting photos of the shockwave as it forms.

This particular photo comes from a 2016 test of smaller camera equipment. That new camera tech is necessary because, when the LBFD begins its testing in 2022, it will be flying at 60,000 feet. That’s too high for ground-based cameras to photograph the shockwave — or relative lack thereof — and so the photographs will need to be taken from a second jet. This test proved the smaller cameras needed to fit inside the chase aircraft can get the photo.