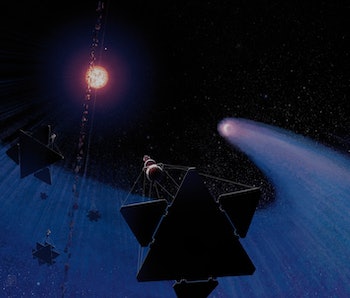 Planets are a lot like cops in ‘90s action movies, in that the best and coolest ones play by their own set of rules. (Seriously, any astronomer will back me up on this analogy. Go ask Neil deGrasse Tyson. I’ll wait.) And by that metric, there is no cooler planet in the cosmos than GJ436b.

Astronomers first discovered something awesome and weird about GJ436b in 2015, when they learned the heat of the star it orbits is evaporating its atmosphere, creating a massive tail of hydrogen gas pouring into space. While most planets are too boring to be anything but planets, GJ436b’s tail means that it also works as a comet, possibly as part of some unsanctioned undercover police work that the chief is going to have his badge for. (Again, Neil deGrasse Tyson knows what I’m talking about here.)

But it’s the finding reported Monday in Nature Communications that really establishes GJ436b as the universe’s ultimate loose cannon.

Researchers from the University of Geneva found that the planet’s orbit is eccentric. That’s actually way understating the case: In our solar system, a dwarf planet like Pluto has an eccentric orbit, in that it’s tilted at an angle of 17 degrees from the solar system’s equatorial plane.

GJ436b’s orbit is so eccentric that it passes over the poles of its star, meaning it’s basically perpendicular to the equatorial plane on which a planet would normally orbit. And it’s not doing this at any great distance: It orbits the red dwarf GJ436 at about three percent the distance between Earth and the Sun, subjecting it to the absurd gravitational forces

To put it mildly, planets aren’t supposed to orbit that way. The formation of a solar system is meant to create a relatively orderly state in which gravitational forces bring matter together into nearly spherical planets, which then orbit their stars in nearly perfect circles on the same gravitationally created equatorial plane, which lines up with the axis of the star’s own spin.

So how has GJ436b gone so topsy-turvy? Like any iconoclastic cop worth their salt, the planet’s present unhinged state may be the result of a dark, traumatic backstory suffered at the hands of an arch-nemesis.

In all likelihood, according to the researchers, there’s another planet in the GJ436 system that has so extremely distorted the planet’s orbit. It’s also possible, perhaps even probable that this mysterious hidden planet was responsible for sending GJ436b into such close proximity about its star, creating the conditions that are making it vent its atmosphere into space.

That’s all the more reason for GJ436b to pull itself together and prove its planetary rival is setting it up before it gets kicked off the force — or, you know, ripped apart by its star’s intense gravity.