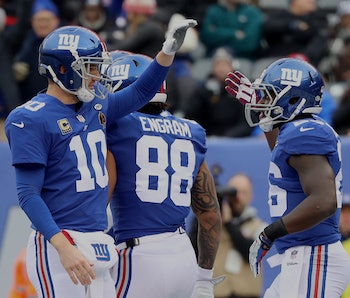 The Arizona Cardinals were rocked by injuries and came up short in their last-ditch effort to sneak into the playoffs. The New York Giants collapsed from pretty much the start. A hive mind of about 30 NFL fans predicts the Cardinals will win Sunday.

This is a tough game to predict, considering neither team has much of anything to play for. The Arizona Cardinals face an uncertain offseason where their coach, quarterback, and franchise icon — in wide receiver Larry Fitzgerald — could all retire. The New York Giants are officially starting over after a complete shambles of a year that saw the firing of both coach and general manager, plus what turned out to be the wholly unnecessary one-week benching of Eli Manning. This game has preseason-quality stakes, basically.

The swarm predicts the Cardinals will win, a pick made with low confidence and 86 percent brainpower.

The hive mind predicts the Cardinals will win by four to six points, with 84 percent brainpower behind that pick. The Vegas line has the Cardinals by five points.