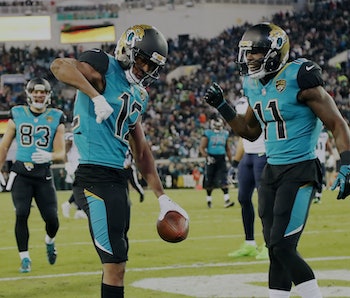 The Jacksonville Jaguars got their most impressive win of the season last week against the Seattle Seahawks, clinching their first winning season since 2007. Now they have a chance to snag their first playoff berth in a decade against the ailing Houston Texans. A hive mind of about 30 NFL fans predicts the Texans will win Sunday.

We mostly use this space to keep ticking off the Jaguars’ accomplishments, because they have been perhaps the season’s most fun story. Reaching 9-4 means they could lose all their remaining games and still go down this season as winners. And while 9-7 is probably enough to make the playoffs in this putrid AFC, they can avoid any drama and keep their AFC South title hopes alive by defeating the Texans, who have understandably fallen apart since the season-ending injury to rookie sensation Deshaun Watson — who was, until said injury, the other most fun story this season.

The swarm predicts the Jaguars will win with high confidence and a whopping 96 percent confidence behind the pick.

The hive mind likes the Jaguars to win by 10 to 12 points. The Vegas line favors Jacksonville by 11 points.