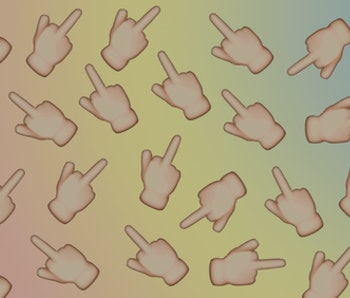 How do you stand out of a crowd that’s 1.5 million apps deep? Snark your way to success.

Meet Daily Drudge, a planning app with the tagline: “A daily calendar for your busy schedule. And an asshole.” It’s like Google Calendars, if Google Calendar drove you to drink instead of just reminding you when it was time for happy hour. Developer Chris Scott and his coworkers “planned to keep our identities anonymous because DD is such a dick,” but — as it happens — DD is part of a crop of dickish apps. Everyone (well, almost) enjoys a lovable asshole.

Funny or Die’s Real Weather, already makes other weather apps seem like Puritan preachers by comparison and Siri for Android, a parody of Apple’s disembodied girlfriend, isn’t the nicest bot in town.

The genius of these apps is that they still do their jobs, making them the software equivalent of a functional alcoholic without the whole cycle of recovery. And it makes a certain kind of sense that, in 2015, apps would try to differentiate themselves with humor. As The Onion’s viral beast Clickhole eats the Internet, the Internet spits up more Clickholish content, even in its stuffiest of corners. In essence, what’s happening is that the predictable content contained by programs has become an eminently mockable genre of writing. It’s all placeholder prose so there is a major opportunity to differentiate by holding places with more compelling text.