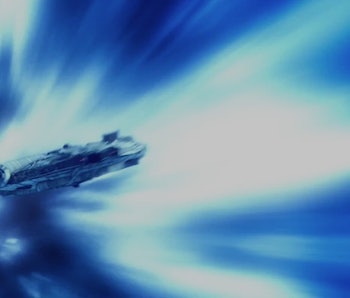 There isn’t any additional footage after the credits roll in Star Wars: The Last Jedi, but in a sense, at least philosophically, there is kind of a post-credits scene.

Light Spoilers for The Last Jedi follow. But, stop reading now if you don’t want to know. Seriously. Stop.

In many ways, what seems like the final scene of The Last Jedi is very reminiscent of The Empire Strikes Back. The remnants of the Resistance are all hanging out on the Millenium Falcon, and we’re given the general sense that there is still hope for the good guys. The movie could have easily closed on the Falcon, flying into space, much in the way it few off in Empire.

But that’s when things change. The scenes that follow the final scene with our primary characters, does something no Star Wars film has done before: shift the focus to tertiary, unnamed characters, people who are practically strangers to the audience. We’ve got children hanging out on a faraway planet, looking up to the stars and dreaming. It’s almost a metafictional ending, one that acknowledges that the fandom of Star Wars is probably bigger than the films themselves. The children with their special Rebel Alliance/Resistance rings could be members of the audience. Which is part of why this scene feels like it’s in addition to the rest of the film.

But, because of the different texture and tone of this scene, it certainly feels extra. A lot of people have compared Star Wars to the structure of classical music in the past. And so, the most appropriate term for this scene is to call it a “coda.” It’s distinct and apart from the formal ending of the film, but it’s definitely, relevant, and maybe even, foreboding for future Star Wars films beyond 2019…

Star Wars: The Last Jedi premieres in theaters on December 15. Check out all of Inverse’s coverage on the film right here