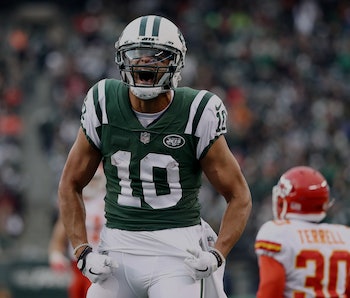 The Denver Broncos are mired in the longest losing streak in franchise history and are in utter disarray. The New York Jets have done way better than anyone would have predicted in reaching 5-7. A hive mind of about 30 NFL fans predicts the Jets will win Sunday.

Look, I’ll admit I’m not the deepest football analyst out there. And what it often means when you’re dealing with a not especially deep football analyst is a lot of discussion of quarterbacks. Which, yes, guilty as charged! But in this case, it’s hard to avoid. The Denver Broncos have been unable to get anything out of its three quarterbacks after Trevor Siemian’s early competence vanished, whereas the Jets have won way more games than expected because Josh McCown, at 38, up and had a career year. That’s not everything going on here — the Jets’ defense has held up well, and consider the dull but important competence of Jets coach Todd Bowles with first-year Broncos coach Vance Joseph, who may be in over his head — but the Jets have ridden the best version of Josh McCown ever to close to a .500 record. That’s amazing, frankly.

The swarm predicts the Jets will with, albeit with low confidence and 83 percent brainpower behind the pick.

The hive mind likes the Jets to win by four to six points, with 82 brainpower behind that prediction. The Vegas line has New York by a point.