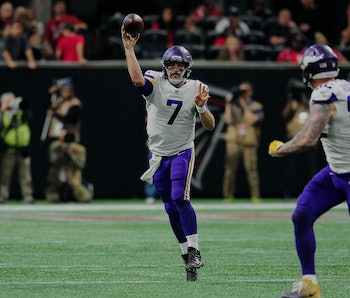 Perhaps the biggest game of this week’s NFL slate sees the NFC-leading Minnesota Vikings head to Charlotte to take on the Carolina Panthers, who remain very much in the mix for the NFC South title. A hive mind of about 30 NFL fans predicts the Vikings will win Sunday.

The Vikings have gone from carousel of injured quarterbacks to accidental beneficiary of Aaron Rodgers’s latest injury to possibly the best team in the whole damn conference, all with journeyman backup Case Keenum doing enough at quarterback to let the defense and rushing attack do their thing. They could become the first team ever to clinch home field advantage through the Super Bowl, given Minnesota is hosting the game this season. Meanwhile, the Panthers have looked generally very good this year but have struggled against the NFC’s best, with three of their losses coming to the Philadelphia Eagles and twice to the New Orleans Saints. Oh, and once to the Chicago Bears. The Bears have just the weirdest wins this year.

The hive mind likes the Vikings to win this one, though only with low confidence. There’s a reasonably high 89 percent brainpower behind the pick.

The swarm feels good about the margin of victory, predicting Minnesota will win by four to six points with 90 percent brainpower. The current Vegas line is the Vikings by 2.5 points.