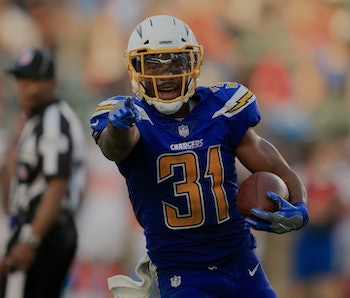 The Los Angeles Chargers have clambered out of their 0-4 hole to reach .500, with a chance to move into a tie for the AFC West lead with a win Sunday. To do that, they have to take down an injury-plagued Washington team with little but pride left to play for. A hive mind of about 30 NFL fans predicts the Chargers will win.

Los Angeles doesn’t have the longest winning streak in the NFL — the New England Patriots and Minnesota Vikings have both built 10-2 records on the strength of eight straights wins. But to have won six of eight to reach 6-6 after losing their first four games gives them a serious claim as the NFL’s hottest team. In the otherwise lackluster AFC West, their backloaded success makes them the most interesting and dangerous team going, and a win at home against Washington would keep them on track to become only the second team — after 1992’s San Diego Chargers squad — to go from 0-4 to the playoffs.

The hive mind predicts the Chargers will win with high confidence, though there’s only 77 percent brainpower behind the pick.

The swarm likes the Chargers to win this by seven to nine points, with 86 percent brainpower behind that pick. The Vegas line has Los Angeles by six.