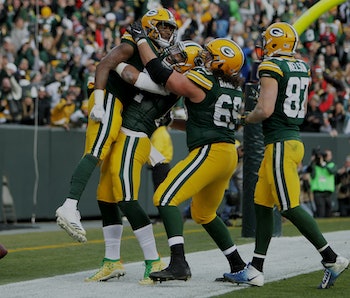 The Green Bay Packers haven’t completely folded during the seven-game absence of star quarterback Aaron Rodgers, who is due back next week. The Cleveland Browns have had literally nothing go right during a miserable 0-12 season. A hive mind of about 30 NFL fans predicts the Packers will win Sunday.

The Packers are definitely ready for Rodgers to return, considering backup Brett Hundley most recently passed for just 84 yards again the Tampa Bay Buccaneers in a game Green Bay somehow won. The winless Browns should be about as close to a guaranteed win as it gets, as they have lost their past five games by at least two scores. But maybe, just maybe, the Browns are overdue for a little good luck, and there are fewer better ways to manufacture some good fortune than playing a backup quarterback who, though not terrible has pretty ably demonstrated he is indeed a backup.

The hive mind predicts the Packers will win with high confidence and 86 percent brainpower.

The swarm sees the Packers winning by seven to nine points, with 82 percent brainpower behind the prediction. The Vegas line has the Packers by just three points.

More like this
Innovation
8.11.2022 11:00 AM
“Quantum materials” could give the human brain a run for its money, scientists say
By Nathaniel Scharping
Innovation
8.5.2022 11:00 AM
Alexa could diagnose Alzheimer’s and other brain conditions — should it?
By Joanna Thompson
Innovation
7.29.2022 2:00 PM
Amazon's new invention could let you “speak” to the dead — but should it?
By Sofia Quaglia
Related Tags
Share: