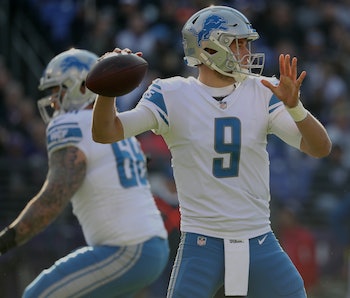 The Detroit Lions are 6-6 and hanging on by a thread in the top-heavy NFC playoff race. Not the best time for quarterback Matthew Stafford to injure his throwing hand, with his status questionable for Sunday’s game against the disappointing Tampa Bay Buccaneers. A hive mind of about 30 NFL fans predicts the Lions will win.

The Lions would need a lot to break right to sneak into the playoffs, considering the current occupants of the sixth and final spot have an 8-4 record. All they can really do is try to win out and hope for the best, and the first part of that comes with a win against the Buccaneers, who have one of the worst defenses in the league. That might make things a bit easier for Detroit’s beat-up offensive line and second-year backup quarterback Jake Rudock, who would get the call if Stafford can’t play.

The swarm picks Detroit to win with low confidence and a high 91 percent brainpower behind that prediction.

The hive mind likes Detroit to win this by four to six points, with 80 percent brainpower behind that choice. There’s no line for this game in Vegas, likely because of Stafford’s uncertain status.