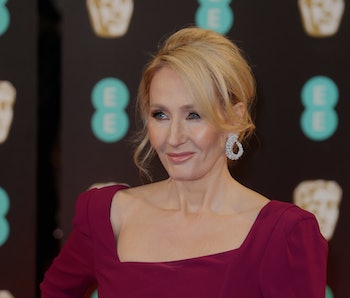 Johnny Depp is impersonating author J.K. Rowling right this second using Polyjuice Potion.’s casting as the dark wizard Gellert Grindelwald in Rowling’s five-part Fantastic Beasts series has been controversial from the beginning. Rowling, famous for being active on Twitter and usually open with fans, came under fire for remaining relatively silent about the very public issues surrounding Depp.

Depp, who was originally cast to play Grindelwald in Fantastic Beasts and Where to Find Them (2016), was accused by now-ex-wife Amber Heard of domestic assault in May 2016. Rowling’s statement addresses these issues, as vague as her answer may be. And her answer is already causing rifts within the Potter fandom.

On Thursday, Rowling posted an explanation about the “Grindelwald casting” to her blog. The complicated legal conditions surrounding Depp and Heard’s case — which includes multiple witnesses, several court hearings, a restraining order, and Heard eventually dropping the case after successfully divorcing Depp — have resulted in a large majority of the Harry Potter fandom turning against Depp and, subsequently, Rowling for her part in casting him.

When Johnny Depp was cast as Grindelwald, I thought he’d be wonderful in the role. However, around the time of filming his cameo in the first movie, stories had appeared in the press that deeply concerned me and everyone most closely involved in the franchise.

Harry Potter fans had legitimate questions and concerns about our choice to continue with Johnny Depp in the role. As David Yates, long-time Potter director, has already said, we naturally considered the possibility of recasting. I understand why some have been confused and angry about why that didn’t happen.

The huge, mutually supportive community that has grown up around Harry Potter is one of the greatest joys of my life. For me personally, the inability to speak openly to fans about this issue has been difficult, frustrating and at times painful. However, the agreements that have been put in place to protect the privacy of two people, both of whom have expressed a desire to get on with their lives, must be respected. Based on our understanding of the circumstances, the filmmakers and I are not only comfortable sticking with our original casting, but genuinely happy to have Johnny playing a major character in the movies.

I’ve loved writing the first two screenplays and I can’t wait for fans to see ‘The Crimes of Grindelwald’. I accept that there will be those who are not satisfied with our choice of actor in the title role. However, conscience isn’t governable by committee. Within the fictional world and outside it, we all have to do what we believe to be the right thing.

Fan reactions to the statement have been mixed, especially on Twitter. But, as Rowling points out in her post, the situation is complicated and “the agreements that have been put in place to protect the privacy of two people” — presumably Depp and Heard’s legal cases and divorce papers — “must be respected.”

Still, the issues with Depp tend to fall under the same umbrella as other sexual assault cases currently stripping the entertainment and media industries of abusers. Depp, once a beloved character actor known as the eccentric star of Pirates of the Caribbean and Edward Scissorhands, has devolved into a maligned figure, especially in more liberal circles.

For now, Rowling has addressed the issue in as vague a way as humanly possible, as she’s most likely bound by several contracts and more legalize than the Ministry of Magic could muster up. It seems this is all the explanation we’ll get for the time being.

Johnny Depp will still star as Gellert Grindelwald in Fantastic Beasts: The Crimes of Grindelwald, which premieres in theaters on November 16, 2018.

More like this
Entertainment
18 hours ago
Knock at the Cabin's Ending is Shyamalan's Most Surprising Twist Yet
By Eric Francisco
Entertainment
22 hours ago
Mandalorian Season 3 Trailer May Reveal an Ancient Alien Species
By Dais Johnston
Entertainment
1 hour ago
The Last of Us Season 2 Needs to Fix the Second Game’s Biggest Flaw
By Alex Welch
LEARN SOMETHING NEW EVERY DAY.
Share: