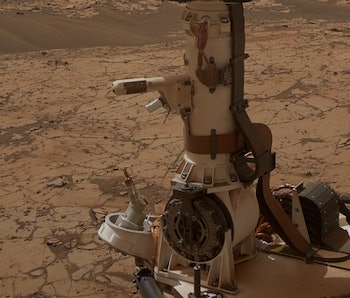 In the same spirit of many a fictional character, Mark Watney of Andy Weir’s The Martian — soon to be portrayed by Matt Damon — has a Twitter account. However, the account seems to be as stranded in space as Watney himself. Mark last tweeted in May of 2014. Will he tweet again?

The self-published bestseller is an old fashioned survival narrative of man versus wild, only, in this case, the wild is the cracked red landscape of Mars.

In another instance of art imitating life, just as Watney’s fellow astronauts left him stranded on Mars, his Twitter followers appear to have forsaken him. At last count, he had seven. None of them were NASA, which — of course — Watney follows.

Well, we’re rooting for this account and for Matt Damon, who seems like a decent guy and a nice fit for the lead in the space opera version of Home Alone.

More like this
Science
Jan. 29, 2023
NASA-funded study to research if bacteria could help form building materials on Mars
By Matt Williams and Universe Today
Innovation
Jan. 25, 2023
Starship orbital flight: SpaceX successfully loaded the rocket with over 10 million pounds of propellant
By Mike Brown and Molly Glick
Science
Feb. 6, 2023
How the Webb Telescope is Rewriting What We Know About the Early Universe, One Galaxy at a Time
By Doris Elín Urrutia
LEARN SOMETHING NEW EVERY DAY.
Related Tags
Share: