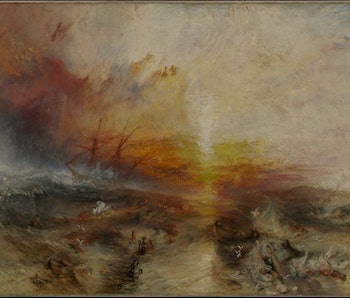 In the increasingly bizarre saga of Rachel Dolezal, a new story has surfaced, one that might give you hope for humanity — if not for Dolezal. On her blog, Dolezal claimed to be the artist behind a painting that looked suspiciously similar to a masterpiece JMW Turner. The Dolezal “original” was actually a rip-off of Turner’s The Slave Ship, which art historians recognize as a seminal work of nineteenth century nautical painting, which was a big damn thing. Presumably Dolezal thought no one would notice. They did.

And, ultimately, isn’t this the takeaway from the whole tawdry affair: Give people enough time and they’ll notice stuff.

Turner’s The Slave Ship, which was painted in 1840, currently hangs in The Museum of Fine Arts Boston, an institution that is about as under-the-radar as The Met. And yet, Dolezal is trying to pass off a version of that painting as original work and sell it for upwards of $5,000. This is insulting in a more general way than passing one’s self off as a different race. To put out someone else’s famous work as your own is to posit a simple question: Are people really dumb?

And here’s your answer: NO.

Dolezal clearly has some personal issues she needs to work out and we wish her luck as she begins that process under the spotlights, but the first misconception she needs to deal with is that people don’t notice stuff. The truth is that people are basically trusting until given reason not to be — at which point they’re pretty smart about separating the real shit from the bullshit. That’s a nice thing about the only race we’re all sure Dolezal belongs to, the human one.