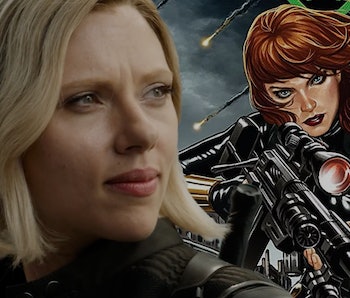 Avengers: Infinity War hasn’t even come out yet, but Marvel fans are already worried about what’s going to happen in Avengers 4, which doesn’t even have an official title yet. There’s a good reason for the concern, though, as the fourth Avengers film marks the end of the actors’ contracts for all of the original heroes. Somebody’s going to die — and recent comments from Black Widow’s actress Scarlett Johansson suggest that she might not be coming back after Avengers 4.

It’s probably nothing, so don’t freak out, but just throwing this out there: Black Widow is currently dead in the Marvel comics.

Speaking to Vanity Fair on the set of Avengers 4 in an interview published in late November, Johansson talked about the future of the MCU and indicated that she wouldn’t be part of it.

“It’s bittersweet to imagine not having these films to come back to,” she said. “I’ve been living this story with these people for 10 years through ups and downs. We’ve built a great family. Personally, it feels like a loss.”

“It’s very surreal for me to watch these new cast members come in and get their feet wet and breath new life into these characters who are so iconic,” she continued, after telling a story about Brie Larson interacting with the Hulk. “I feel a lot of joy for the next generation. It’s a bittersweet feeling but overall it’s a positive one. I feel good about the work we’ve done and the work I’ve done.”

Avengers 4 is going to really shake up the MCU, so it’s not really that surprising that Johansson, who will have been in seven movies by the time the fourth Avengers comes out, might be taking a final bow. How she goes is a bigger question, and it would be a shame to kill off the MCU’s first major female hero before she gets that much clamored-for solo movie.

Given how poorly the Secret Empire storyline was received, there’s almost no chance that Marvel Studios would consider turning Chris Evans’s Captain America into a member of Hydra, the evil group that allied with the Nazis in World War II. So, Johansson probably doesn’t need to watch her neck around the MCU’s cap.

Marvel comics and movies have an interesting relationship, in that the comics provide the characters and story framework for the movies, and then the films make those iterations of the characters so popular that the comics tend to change team rosters around to match the cinematic counterparts. Marvel’s unlikely to kill off movie Black Widow just because she died in a poorly conceived comic, but her prominence in the MCU maybe should’ve spared the character this fate in the comics in the first place.

When and if Johansson leaves the MCU, and Black Widow goes with her, it should be on their terms, not the comics. Black Widow can be killed, but not like this.