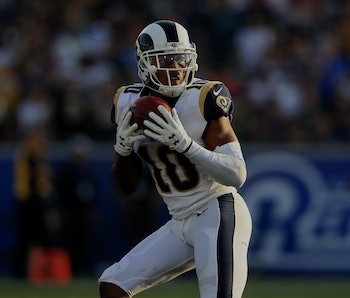 The Arizona Cardinals have had more than their fair share of brutal losses this season, including likely season-ending injuries to star running back David Johnson and quarterback Carson Palmer. But no game was worse than the 33-0 beatdown the Los Angeles Rams handed out in October. A hive mind of about 30 NFL fans predicts the Rams will win Sunday’s rematch.

Credit to the Cardinals: For all their hardships, the team has managed to eke out a 5-6 record that is really not bad in the context of all that misery. Replacement quarterback Blaine Gabbert even had his karmic revenge game last week when he took down his old team, the Jacksonville Jaguars. But the Los Angeles Rams are coming off one of their best wins of the year with last week’s triumph over the New Orleans Saints, and they look to pad their advantage in the NFC West.

The hive mind predicts the Rams will win with high confidence and 92 percent brainpower behind the pick.

The swarm likes the Rams to win by seven to nine points, with 92 percent brainpower behind the pick. The Vegas line for the game is the Rams by seven.