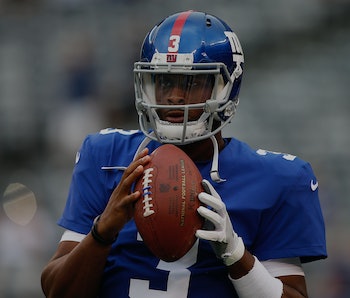 Eli Manning started the last 210 games for the New York Giants. He won’t start this Sunday against the Oakland Raiders, with journeyman backup Geno Smith taking over for the remaining weeks… maybe. A hive mind of about 30 NFL fans predicts the Giants will win Sunday.

There was probably no good way for the Eli Manning era to end in New York, as the team collapsed around him in a morass of injuries and mismanagement. But still, this was bad, with Manning being offered an opportunity to keep starting with the understanding he’d come out of the game early so his backups could be evaluated and then ignominiously benched when he declined. So Smith instead steps in, with rookie Davis Webb expected to get a look at some point. The Raiders have to be at least a little happy about this being the state of their opponents, especially when they have a chance to move into a tie for the AFC West lead with the win.

The hive mind predicts the Raiders — the 5-6 Raiders! — to win with high confidence, with a huge 89 percent brainpower behind the pick.

The swarm predicts the Raiders will win by seven to nine points with 90 percent brainpower. Vegas currently has them by 8.5 points.

More like this
Innovation
Jan. 19, 2023
A robot choreographer reveals why M3GAN — and all robots — should dance
By Molly Glick
Entertainment
14 hours ago
Robert Zemeckis Has Found His Latest Tech Tool With AI De-Aging — And That’s Good
By Dais Johnston
Gear
15 hours ago
Why Mercedes-Benz’s Self-Driving Milestone is a Big Deal for Autonomous Cars
By Jackson Chen
LEARN SOMETHING NEW EVERY DAY.
Related Tags
Share: