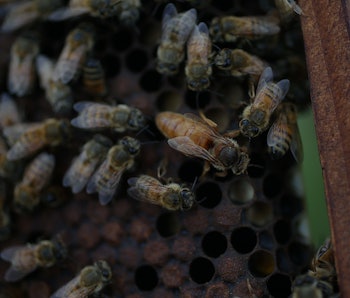 A study reported on Tuesday says that wild bees alone contribute $3,251 per hectare per year of crop pollination over $300 on average ahead of the $2,913 produced by controlled honeybee populations. The figure could mean billions to farmers worldwide, which basically makes wild bees the best interns ever.

The study, whose main goal was to put dollar amounts towards “ecosystem services” for the natural resources that are used to cultivate crops that feed us like coffee, fruits, and vegetables, tracked hundreds of species of bees over a three year period, and monitored 1,394 separate fields worldwide. The results of the 58 researchers behind the study found that an incredibly small 2 percent of wild bees pollinate 80 percent of all pollinated crops.

The results have an added irony with respect to conservationists. If they advocate for bee colony preservation and protection with a purely economic angle, it’s basically negated by the wild bees doing all the work of the lazy, good for nothing controlled colonies. They’re letting all that conservation go to their little buzzing heads.

However, scientists are quick to defend conservation as a whole. University of Vermont professor Taylor Ricketts, who was one of the co-authors of the study, said that it, “shows us that wild bees provide enormous economic benefits but reaffirms that the justification for protecting species cannot always be economic. We still have to agree that protecting biodiversity is the right thing to do.”

So it’s a win win for our honey-making brethren. We don’t necessarily have to conserve specific amounts of bees with the dollar amount they’ll produce as the deciding factor, but we should try to conserve them in general because they essentially contribute to our wellbeing. Buzz, buzz means ka-ching, ka-ching.