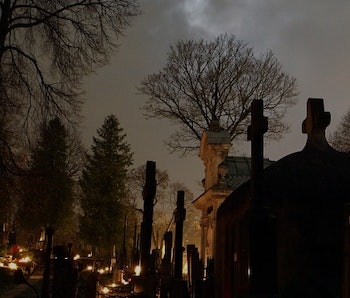 But what is so frightening about a two-decade anniversary? See the latest upcoming horror movie, in which a group of teens tries to pay homage to a horrible event 20 years after the fact, and, shockingly, things don’t go too well:

Twenty years is also the increment of time that (theoretically) marks one’s passage into adulthood. Just look at the infamous Rules of Scary Movies, as outlined by Randy in Scream:

To survive a scary movie, you need a certain level of maturity. You can’t say “I’ll be right back.” You can’t drink or do drugs. And sex is virtually out of the question. The twisted relationship between horror and sex dates at least to gothic literature. Just check out this passage from the original horror classic, Bram Stoker’s Dracula, in which a virginal young woman has been turned into a vampire. Now that she is, her fiancee, along with a band of men who had been obsessed with her, must stab her with a phallic object:

She seemed like a nightmare of Lucy as she lay there, the pointed teeth, the blood stained, voluptuous mouth, which made one shudder to see, the whole carnal and unspirited appearance, seeming like a devilish mockery of Lucy’s sweet purity … Arthur took the stake and the hammer … Then he struck with all his might … The thing in the coffin writhed, and a hideous, bloodcurdling screech came from the opened red lips. The body shook and quivered and twisted in wild contortions … But Arthur never faltered. He looked like a figure of Thor as his untrembling arm rose and fell, driving deeper and deeper the mercy-bearing stake, whilst the blood from the pierced heart welled and spurted up around it. His face was set, and high duty seemed to shine through it … The hammer fell from Arthur’s hand … There, in the coffin lay no longer the foul Thing that we has so dreaded and grown to hate that the work of her destruction was yielded as a privilege to the one best entitled to it, but Lucy as we had seen her in life, with her face of unequalled sweetness and purity.

Think Bram Stoker had some repression issues to work out? Gotta love the Victorians.

The years have been kind.

Randy’s second rule was that you can’t drink or do drugs. Both sex and drugs are things that any rebellious teen has probably done by the time they are 20. In The Shining, for example, drinking acts as an instigator. Jack’s unstable behavior begins its downhill slide when he falls off the wagon. “I’d give my goddamn soul for just a glass of beer,” he says.

His wish was the narrative’s command. Alcohol and/or drugs is a damning combination in a horror movie. If you want to retain your soul, you can’t imbibe, a veritable adult rite of passage.

The delightfully meta Cabin In The Woods winked at this point by leaving the stoner as one of the last men standing.

Of course, as societal attitudes towards sex and drugs change, pop culture’s rules change with it. Randy’s rules may not be set in stone. But as long as the genre pays homage to its Victorian roots, 20 will still remain the go-to scary number. If you find yourself at a location where 20 years ago, something terrible happened, it’s up to you whether you want to have sex or do drugs there. But for God’s sake, don’t have a seance, or you don’t have a chance.