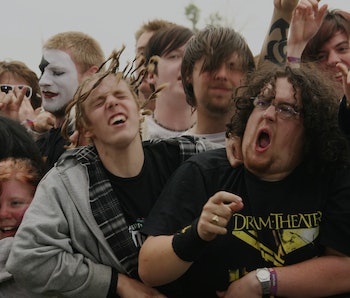 When the 90,000 teens and creepy dudes too old to be there went to the Download Music Festival in England this past weekend, they probably expected to stand in gigantic fields for hours on end only to hear muffled music from a huge stage at least 100 yards away. They probably didn’t expect to step into a dystopian police sting involving a network of European criminals.

Unbeknownst to the probably sloshed attendees, the Leicestershire police used the fest as a dry run for a digital facial recognition program meant to scan faces of large crowds to gather metadata. The cops would then use the scanned footage to check against a database of criminals known to target outdoor music festivals. Or wait until they stop tripping on e’s and wizz to throw them in the slammer. Somewhere, Big Brother cracked a beer.

This is the first time this technology has been used in public. Police say they destroyed the footage after the party.

Chief Superintendant Chris Haward told the BBC: “The software provided an efficient and effective way of picking known offenders out of a crowd — something that officers would previously have been done using paper briefings.” Still, trawling for images of thousands of innocent people may not be the most ethical way to go about finding ex-cons who presumably were banned from festivals.

As facial recognition software improves, law enforcement sweeps like this will only become more common. Erstwhile Brit festival-circuit darling Blur sang it best: They’ve got a file on you.

More like this
Gaming
Sep. 22, 2022
You need to play the funniest music game ever made ASAP
By Joseph Yaden
Entertainment
Oct. 5, 2022
Rings of Power theory reveals a clever clue that proves Halbrand is Sauron
By Mónica Marie Zorrilla
Gaming
Sep. 26, 2022
How to unlock the wild Trombone Champ secret ending
By Joseph Yaden
Share: