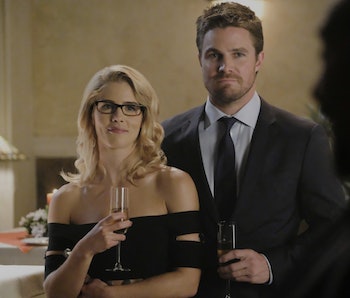 Oliver Queen has really started to get this Green Arrow business down, though that doesn’t mean he’s any better at being a regular person after spending four years on a deserted island. Actually, Oliver still kind of totally sucks at being a regular person. He proved it in the first part of 2017’s DCTV Arrowverse crossover event, “Crisis on Earth-X.”

This post contains spoilers for the first part of “Crisis on Earth-X.”

Oliver Queen — wait for it — proposes to his girlfriend, Felicity Smoak, at someone else’s wedding in the first part of Crisis on Earth-X. This is, by all accounts, a dick move.

First off: excuse me, who does something like that? (A lot of people, apparently, if you scour the internet.) Barry Allen and Iris West have fought for this day for ages and stressed over it for what seems like forever, and Oliver just goes and makes it about him and his complicated relationship with Felicity.

Earlier in the episode, Barry had asked Oliver whether he was ready to propose to Felicity or not. Oliver turned to a starry-eyed Barry and told him that, yes, he loved Felicity but that it didn’t mean he needed to propose immediately. Barry responds maturely, saying that Ollie shouldn’t be alone just because he’s a superhero. When you know, you know.

Not that Arrow fans didn’t know this before, but Ollie is an idiot. A well-meaning idiot, but an idiot nonetheless.

Oliver, seemingly overcome by a fit of emotion during Barry and Iris’s rehearsal dinner, pulls Felicity aside and asks her (very awkwardly) for her hand in marriage, again. They argue and Felicity yells that, no, she does not want to marry Oliver. An awkward hush falls over the room.

Of course, this kind of personal drama falls second to the Nazi versions of superheroes throughout “Crisis on Earth-X” and the cool superhero squad fight sequences. That doesn’t mean Ollie is any less of a dummy.

It’s worth noting that Oliver also skipped out on Barry’s bachelor party, which is the one wedding event Barry would have probably preferred his billionaire bestie to attend. While Oliver’s absence was probably mostly due to Stephen Amell’s contract and other IRL reasons, it reflects badly on Oliver as a friend, mentor, and partner. If Oliver couldn’t show up for the bachelor party as a groomsman, then he could have at least done Barry and Iris the courtesy of not making an extended moment at their wedding all about him.