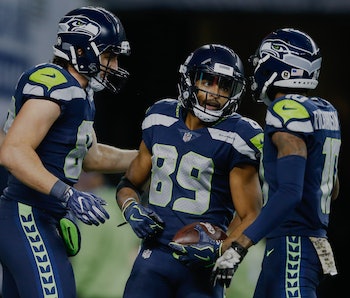 The Seattle Seahawks are banged-up and coming off a tough loss to the Atlanta Falcons last Monday night. If the San Francisco 49ers want to shock the world, this is their moment. A hive mind of about 30 NFL fans predicts the Seahawks will win.

Honestly, that’s probably the correct pick. But if you’re designing a way for the 49ers to beat their divisional rivals for the first time in nearly four years, it mostly involves “every imaginable malady befalls the Seahawks,” and hey, what do you know! The fearsome Seattle secondary is an injury-riddled patchwork, and the 49ers get to come off their bye against a team playing on short rest. Plus, it’s being played in Santa Clara, which is theoretically a home field advantage for the 49ers, assuming you know nothing about the 49ers’ stadium situation in Santa Clara. All that said, the Seahawks are still massively more talented than the 49ers, so this is probably only the start of what needs to happen in San Francisco’s favor to pull this heist off.

The swarm predicts Seattle will win with high confidence, with 95 percent brainpower behind that pick.

The swarm predicts the Seahawks will win by seven to nine points, with 83 percent brainpower behind that choice. The Vegas line has Seattle by 6.5 points.

More like this
Innovation
Jan. 19, 2023
A robot choreographer reveals why M3GAN — and all robots — should dance
By Molly Glick
Gear
14 hours ago
Why Mercedes-Benz’s Self-Driving Milestone is a Big Deal for Autonomous Cars
By Jackson Chen
Entertainment
13 hours ago
Robert Zemeckis Has Found His Latest Tech Tool With AI De-Aging — And That’s Good
By Dais Johnston
LEARN SOMETHING NEW EVERY DAY.
Related Tags
Share: