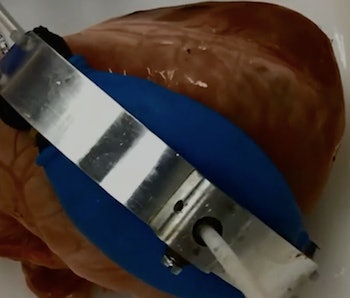 The brain would probably want to argue this point, but the heart is perhaps the most intricate and irreplaceable organ in the human body. And calling it irreplaceable isn’t just a term of endearment: Medical science still has few good ways to swap a healthy heart in place of a damaged one and have any real hope of a permanent solution, especially when a biological transplant isn’t available.

Robots and other artificial replacements simply aren’t there yet, but a new device designed by researchers at Boston Children’s Hospital and Harvard University may have come up with an intriguing alternative solution. Their device looks like a muscular sleeve, as it uses soft robotics to slip onto and around a failing section of the heart and take over its function. It’s the kind of all-encompassing, high-tech life support that puts you in mind of Darth Vader’s armor — except, you know, hopefully less evil.

The team’s research appears in this week’s issue of Science Robotics. As Children’s Hospital cardiac surgery researcher Nikolay Vasilev explained in a statement, a key idea was to help those who are dealing not necessarily with total heart failure but with problems in a specific ventricle.

“We set out to develop new technology that would help one diseased ventricle, when the patient is in isolated left or right heart failure, pull blood into the chamber and then effectively pump it into the circulatory system,” he said. “We’ve combined rigid bracing with soft robotic actuators to gently but sturdily help a diseased heart chamber pump blood effectively.”

What’s so promising about this device compared with existing pumps is that it’s not actually taking over any functions of the heart — it’s simply stepping in to help the heart regain its ability to pump blood normally. That distinction matters because the person’s blood never has to come into contact with anything inorganic, which Vasilev said would greatly reduce the need for anticoagulants to prevent blood clotting. The previously failing heart would be able to return to something close to normal, ideally.

Tests on humans are still a ways away, but the early results on pigs were promising in how it restored the damaged ventricle’s ability to both draw blood and eject it. That all suggests a similar system could indeed someday work for people who need it.