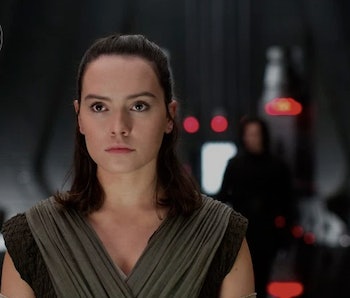 It’s official, the Rey and Kylo Ren dark side alliance is happening in Star Wars: The Last Jedi. New photos and quotes confirm that at some point in the film, Rey and Kylo Ren will view each other as allies.

On Sunday, Entertainment Weekly released the first articles online, excerpted from its forthcoming print issue previewing The Last Jedi. In the piece “Kylo Ren Vs. Rey,” EW’s Anthony Breznican reveals the hows and whys of Rey heading toward a partnership with Kylo Ren.

When Rey feels rejected by Luke Skywalker, who also sees parallels between the power in her and the abilities of his estranged nephew, the old Jedi master inadvertently pushes the two toward each other.

In the same article, director Rian Johnson says “You’re going meet people who you think are going help who don’t. And help is also going come from unexpected places.” Breznican equates this with Kylo Ren’s fall to the Dark Side, sometime before the events of The Force Awakens:

That unexpected place is Kylo Ren, and the situation she finds herself in – alone, unappreciated, is similar to where Ben Solo found himself when broke from his Uncle Luke and followed the Knights of Ren down a darker path.

In the trailers for The Last Jedi, we’ve seen Kylo Ren seemingly offering his hand to help Rey as she tries to find her “place in all this.” And while there was some speculation that the Rey/Kylo alliance was the result of editing trickery, everything about these quotes and observations on the plot plainly say Rey will at the very least, consider allying herself with Kylo Ren. Elsewhere in the same piece both Daisy Ridley (Rey) and Adam Driver (Kylo Ren) indicate that neither of their characters has personal stakes in causes larger than themselves. “The Resistance is really not that much to her,” Ridley says.

Plus, there’s the new photo. In it, Rey is seemingly in Supreme Leader Snoke’s Throne Room, with none other than Kylo Ren standing behind her. While this proximity could indicate solidarity with each other, it’s also possible that this situation echoes Darth Vader bringing Luke Skywalker to the Emperor in Return of the Jedi.

Still, no matter what happens in The Last Jedi, there will be, however briefly, a time when Rey actually entertains the notion of becoming Kylo Ren’s comrade in arms, rather than raise her lightsaber against him.

The Last Jedi is out on December 15.

What the Force was that?!