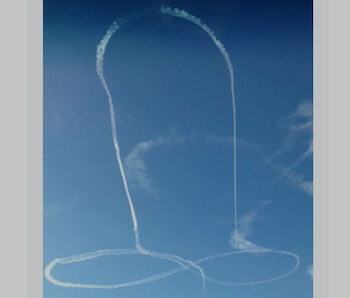 That male genitalia across Washington state’s blue skies has finally been explained.

The Navy has fessed up it was their crew who did it.

Naval Air Station Whidbey Island officials confirmed their aircraft drew the penis-shaped contrails — the hot, humid exhaust from a jet engine that mixes with the colder air of the upper atmosphere, turning into white clouds — that made the rounds on social media last week.

The Navy’s response to the penis-shaped contrail prank was predictably harsh.

“The Navy holds its aircrew to the highest standards and we find this absolutely unacceptable, of zero training value and we are holding the crew accountable,” the Navy told CBS affiliate KREM-TV. The pilot has been grounded, it seems.

Turns out the phallic air drawings put into the sky on Thursday were artfully done by an EA-18G Growler with Electronic Attack Squadron 130, ironically known as “The Zappers.”

Local news stations were alerted to the contrail artwork when the mother of a young child raised concerns about the inappropriate drawings. Of course, Snapchat-ready users took notice and began posting photos, causing the Navy’s mishap to go viral.

It was exactly what the internet needed to create a hilarious meme.

“A penis in the sky”

“The most monumental thing to happen in omak. A penis in the sky,” wrote local resident Anahi Torres, along with a photo of the outlined penis against a clear sunny sky.

It wasn’t long before some users showed their patriotic appreciation for what American fighter jet pilots can do with a plane.

“The fact a navy pilot can even do that should make us all proud. Give em’ hell!!” @kg_NewsAccount tweeted.

While the Federal Aviation Administration is concerned about the misconduct, officials say there is nothing they could have done mid-act without risking the safety of the pilots involved.

More like this
Culture
Jan. 14, 2023
2,454 years ago, one eerily familiar event led to the downfall of Ancient Athens
By Rachel Hadas and The Conversation
Innovation
Jan. 19, 2023
A robot choreographer reveals why M3GAN — and all robots — should dance
By Molly Glick
Culture
14 hours ago
29 years ago, one pivotal sci-fi series got a second chance
By Ryan Britt
LEARN SOMETHING NEW EVERY DAY.
Share: