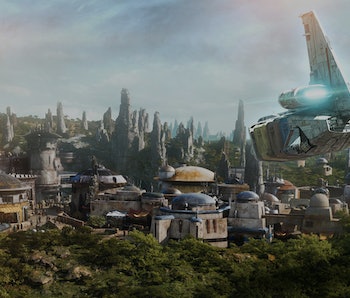 The far, far away galaxy that Star Wars takes place in just got a little bit bigger, as Disney and Lucasfilm have revealed a brand-new planet called Batuu, which will serve as the setting of an upcoming Star Wars theme park.

Disney unveiled all the new information about the planet on Friday morning, letting fans know what to expect if they visit Star Wars: Galaxy’s Edge, an addition to Star Tours at Disney’s Hollywood Studios and Disneyland park, set to open in 2019.

Based on some images and a trailer, Batuu looks like a fusion of several different Star Wars planets we’ve seen before. The buildings are similar in style to the ones on Tatooine, but with more of a Naboo/Yavin 4 sheen. Most striking are the mountains in the background, which look like they were inspired by the very real cliffs at China’s Star Zhangjiajie National Forest Park (the inspiration for Avatar’s floating cliffs).

Here’s what starwars.com had to say about Batuu, which the described as an old trading post that’s since become an off-the-beat frontier town and hiding place:

This remote outpost on the galaxy’s edge was once a busy crossroads along the old sub-lightspeed trade routes, but its prominence was bypassed by the rise of hyperspace travel. Now home to those who prefer to stay out of the mainstream, it has become a thriving port for smugglers, rogue traders and adventurers traveling between the frontier and uncharted space. It’s also a convenient safe haven for those intent on avoiding the expanding reach of the First Order. While Batuu may be new to us, it is clearly already familiar to many characters from the Star Wars saga as a stepping off point for epic adventures.

The trailer ends with a BB-8 sighting and a parked Millennium Falcon, but it’s probably not canon.

If you liked this article, check out this video of a real-life Star Wars speeder bike.