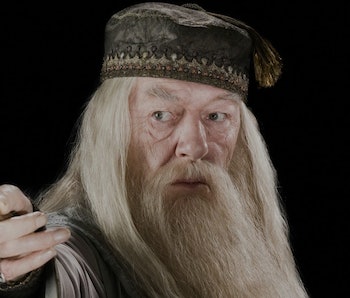 The next film in the Harry Potter saga, shrouded in an invisibility cloak as it may be, finally has a premiere date. The as-yet-unnamed sequel to 2016’s Fantastic Beasts and Where to Find Them will premiere in theaters on November 16, 2018. But while that mystery has finally been answered, there are still a lot of details to unpack.

The official Fantastic Beasts Twitter account announced the sequel’s premiere date on Wednesday and tweeted out an infuriatingly vague photo of two wands lying side by side. The one on the left is instantly recognizable as the Elder Wand, one of the three fabled Deathly Hallows and a key component to J.K. Rowling’s aptly named Harry Potter and the Deathly Hallows. The other wand, a black, jewel-tipped wand with a similar length to the Elder Wand, is unknown.

First and foremost, the unknown wand might be Dumbledore’s wand from before he defeated Gellert Grindelwald and claimed the Elder Wand for his own. This is total speculation, but the important thing here is that we don’t know what kind of wand Dumbledore had before he got the Elder Wand. Potter fans have speculated that Dumbledore’s original wand might have had a phoenix feather core similar to Harry Potter’s and Voldemort’s (who both had feathers from Dumbledore’s pet phoenix, Fawkes). Phoenix feather cores produce a wide variety of spells, and Dumbledore was a talented, versatile wizard; it seemed like there was nothing he couldn’t do.

In 2007, Rowling reportedly said, “I must admit, I always wondered why nobody ever asked me what Dumbledore’s wand was made of!” but that was probably in reference to the Elder Wand, as knowing the makeup of the wand could have ruined the twist. But because we don’t know what Dumbledore’s original wand was, then the wand on the right could very well be that wand.

If we’re seeing Dumbledore’s original wand then that means we might see the moment he replaced it with the Elder Wand. And that means the next Fantastic Beasts film, the second in the five-movie series, might detail the famous moment in which Dumbledore defeated Grindelwald and was solidified as the most powerful wizard alive.

Very little is known about what to expect of the next four Fantastic Beasts films, including the sequel, but various Potter accounts have detailed that the sequel will go down not long after the first film. Supposedly, Newt Scamander (Eddie Redmayne) will have recently published his famous book, Fantastic Beasts and Where to Find Them, and will work together with Dumbledore (Jude Law) to take down Grindelwald (Johnny Depp).

Even though Grindelwald was captured at the end of the first film, he’ll be up to no good again in the sequel and maybe, just maybe, Dumbledore will have to take him down. This important battle in Wizarding history helps put the events of Rowling’s Harry Potter series into action. And it’ll probably look amazing.

The unnamed Fantastic Beasts and Where to Find Them sequel will premiere in theaters on November 16, 2018.