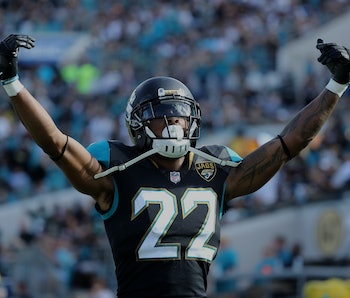 The Cleveland Browns and Jacksonville Jaguars have been two of the worst teams in the NFL for the past several seasons. But while the Browns are right on schedule for another top draft pick as they sit at 0-9, the Jacksonville Jaguars are a frankly shocking 6-3 and atop the AFC South. A hive mind of about 30 NFL fans predicts the Jaguars will win Sunday.

Because it’s always amazing to do so, let’s recap what the Jaguars have already accomplished. At 6-3, they have already exceeded in nine games their full season win totals for every year since 2011. For three of those recent seasons, the Jaguars’ six wins actually doubles or even triples up their entire win total. Meanwhile, the Cleveland Browns have shown signs of life here and there, but internal strife and just a general lack of talent has them looking as lost as ever.

The hive mind predicts Jacksonville will win with high confidence, with 82 percent brainpower behind the pick.

The hive mind was split between a couple options for the margin of victory, ultimately opting for 10 to 12 points with 70 percent brainpower. The Vegas line currently favors Jacksonville by 7.5 points.