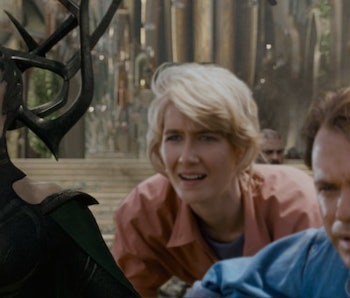 Taika Waititi’s Thor: Ragnarok was pretty great, but it fell short on one crucial metric: It only included two of the three stars of Jurassic Park. But, if Waititi has his way, he knows exactly how to get Laura Dern into the Marvel Cinematic Universe alongside Jeff Goldblum and Sam Neill.

Goldblum is hard to miss in Ragnarok, as his Grandmaster character steals every scene he’s in. Neill’s appearance is just a cameo, though, as he plays an Asgardian playing Odin in a play a disguised Loki commissioned retelling a highly biased version of [Thor: The Dark World](/topic/thor)’s plot. Neill, alongside Matt Damon and Chris Hemsworth’s brother Luke, make totally unexpected appearances to remind audiences what the heck happened in the very forgettable second Thor movie.

That concept, a play retelling the events of the previous movie, is something Waititi told CinemaBlend he’d like to revisit. When CinemaBlend asked if the director had managed to get Goldblum and Neill, two Jurassic Park alums, together on the set, he sadly responded no. But, he has an idea for next time.

I would have loved that. I don’t think they were around at the same time. That would have been amazing just to somehow make that work. It would be awesome if we somehow got Laura Dern in there, as well… Thor 4, exactly. All of them go back and do the play again. It’s a new play about Asgard’s destruction. That might be a great way to start that film.

There’s no official confirmation that there’s going to be a Thor 4 — Thor actor Chris Hemsworth’s contract is up after Avengers 4 — and there’s no indication that Waititi would come back to direct. But, if he did, we might see Ian Malcolm, Alan Grant, and Ellie Sattler acting out Ragnarok.

More like this
Culture
Jan. 28, 2023
Jurassic Park III saw the series try monster horror. Maybe it shouldn’t have.
By Eric Francisco
Culture
Jan. 20, 2023
Why The Lost World is better than all the other Jurassic Park sequels combined
By Ryan Britt
Entertainment
Feb. 1, 2023
DC’s New Secret Weapon is Director-Driven "Elseworlds" Movies
By Eric Francisco
LEARN SOMETHING NEW EVERY DAY.
Share: