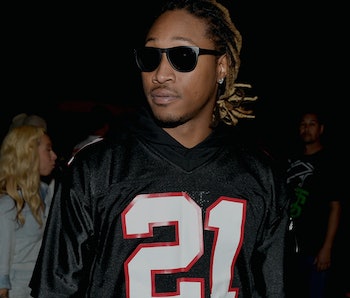 Rap careers come with expiration dates. Once a rapper score their first hit the clock counting down till when their phone calls for guest calls stop ringing, night clubs start passing them up for younger acts and their thousands of fans shrink to a few hipsters and black middle-aged women that just found Christ. Atlanta rapper, Future, who broke though in 2011 with the song “Racks”, appeared to have hit a wall. In the last year his second album Honest was met with a chilled critical response, he went through a divorce with the singer Ciara and it was beginning to look like his moment in the rap world had passed.

Late fall he released Monster, a full-length mixtape, where he partnered with Atlanta’s hottest young producers, Metro Boomin and TM88, on a tape that felt like his earlier tapes Streetz Watchin or True Story. Not a success right at release, but the song “Fuck Up Some Commas” started to gain some traction after a couple months of release. The song doesn’t announce itself to be a hit, but it perfectly encapsulates the druggy haze that Future doubled-down with on Monster. Then January saw the release of his next tape Beast Mode, he quickly followed with 56 Nights, both of which showed that maybe Future was ready to make a return. “Commas” slowly climbed up the Billboard 100 charts up to the #55 slot, and these decidedly street mixtapes appeared to have quickly rebuild Future’s brand.

Future’s appeal was always emotional, whether it was love (“Turn on the Lights”), heartbreak (“Throw Away”) or simply turning the fuck up (“March Madness”). His nicknames (Future Vandross and Future Hendrix) revealed the variety of styles and the emotional depth that he was always capable of tapping into even if he was running through basic trap rap tropes. But on these last projects he’s shrunk that range down to mostly post-relationship world-weariness and struggling to see what he wants from his life. Moments of unabashed joy that appeared on tracks like “Feeling I Get”, now are replaced with the numbed pain of “56 Nights” or “Lay Up”. Future’s newer music might even lack the pop appeal he was flirting with a couple years back, but what’s returned is the emotional rawness that’s always been at the essence of his music.

Yet despite all that he’s put out, it’s hard to find any specific metrics that pinpoint the exact amount of success he’s found during this last run. His music never left late night radio mixes and if you hear rap music blasting from passerby cars, you more than likely hear Future. He won’t appear on a list of songs that could be considered “the song of the summer,” but Future has added another act to his career. Few musicians — especially rappers — can claim that.