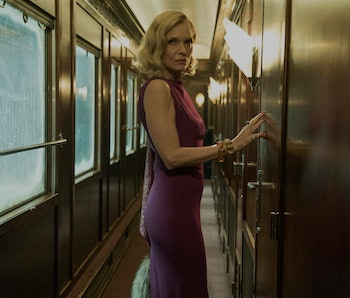 Anyone who’s read Agatha Christie’s 1934 novel Murder on the Orient Express knows what the “what the fuck” moment is at the end of the new movie of the same name. It’s the big twist at the end of the novel, the one that Christie fans will see coming and the one that will shock audiences who go blindly into Kenneth Branagh’s adaptation.

This post contains major spoilers for Murder of the Orient Express.*

Murder on the Orient Express tells the tale of renowned detective Hercule Poirot, a Christie staple, as his relaxing three-day journey aboard the Orient Express devolves into a chaotic murder investigation. The suspects are 13 larger-than-life passengers, most of whom seem to have no connection to the murdered man, Edward Ratchett (Johnny Depp).

Soon enough, though, the audience learns that Ratchett’s real name is Cassetti, and that, a few years before, he murdered a 3-year-old heiress named Daisy Armstrong. Daisy’s murder destroyed her family, killed her mother, drove her father to suicide, and resulted in Cassetti’s death at the hands of the Armstrong family’s remaining friends and relatives.

That’s the twist: Every suspect is responsible. They worked together to murder Cassetti and enact revenge.

In the film, Branagh’s Poirot slowly unravels the mystery before him, treading across the snow toward the suspects, all of whom are lined up at a table before him. He connects each and every one of them back to the Armstrong family and unveils Caroline Hubbard’s (Michaelle Pfeiffer) true identity as Daisy’s grandmother, Linda Arden. The group consists of Daisy’s various caretakers and others personally affected by either her death or the death of her parents.

The film flashes back to the group taking turns stabbing Cassetti with a shared knife. They take revenge for the death of a family.

Poirot questions the nature of justice in this case but eventually decides that each and every one of these people have paid for their crime already — they’ve lived with the pain of Daisy’s death. Breaking with his usual code of outright honesty and equality, Poirot lies to the police, letting them believe that a murderer stole onto the train in the middle of the night, killed Cassetti, and fled before anyone could catch them.

The final twist to Christie’s novel is iconic for a reason — the film, Cassetti’s emotionally haggard murder scene, and the far-away look in Poirot’s vivid blue eyes absolutely do it justice.

Murder on the Orient Express premieres in theaters on November 10.