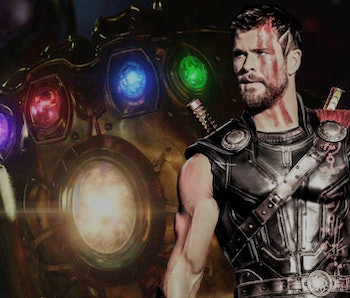 As the Marvel Cinematic Universe gears up for Infinity War, everyone wants to know where all the extraordinarily powerful Infinity Stones are. After all, together, they can give the wielder of the Infinity Gauntlet supreme power over the universe. But, if 2011’s Thor is anything to go by, all the Stones and the Gauntlet are just lying there in Odin’s vault on Asgard. Or at least, they were, before Thor: Ragnarok made a pretty substantial retcon.

On Monday, /Film spoke with Marvel Studios boss Kevin Fiege, and he explained a certain scene in Ragnarok that confirmed what fans had long suspected. In Ragnarok — mild spoiler warning — Hela ventures into Odin’s vault during her conquest of Asgard. When she comes across an Infinity Gauntlet, which fans first spotted as an Easter egg in the first Thor, she pushes it off its pedestal, saying it’s “fake.”

When Thor first came out, the MCU wasn’t the intricately planned juggernaut it is today, and Infinity War was still a long ways away, if it was even being planned at all. So, the Gauntlet was meant to be a cute little bonus for observant fans — not canon that would change the course of the story in years to come. So, Marvel largely ignored it, and we saw Thanos put on what looked like a totally different Gauntlet at the end of Age of Ultron. Until Ragnarok, though, there wasn’t a canon explanation for the extra Gauntlet, though. “We had an internal Marvel theory that it was fake,” Feige’s explained, and his reasoning for why Odin would have a fake one makes sense.

“Odin has a history of doing what he wants to do to maintain power,” Fiege told /Film. “If the Asgardians knew that there was something that had that kind of power, that could theoretically wipe out Asgard and whatever else with a, in the comics, a literal snap of the fingers. They might question Odin’s ability to protect them,” he continued.

So Odin put a fake and he goes, it’s fine, I got it. Look, it’s fine, it’s in our vault, don’t worry about it. And it’s not until Hela goes down there. It was fun being back in that vault, by the way, for the first time since Thor 1. It was just the opportunity to call it a fake. So for people like yourself, and like all of us at Marvel Studios who were paying attention, that answers that question. And for people who have no idea that an out-of-focus Infinity Gauntlet appeared in the back of Thor 1, it just showcases her knowledge and her sort of disgust with the way Odin had handled things on her way to the true power that is below the surface.

See Also: Where Are All the Infinity Stones After Thor: Ragnarok?

Infinity War premieres on May 4 in the United States. Thor: Ragnarok is already in theaters.