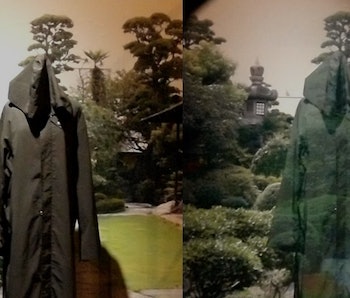 Harry Potter had a lot of cool stuff — an enemy-tracking map, a flying Ford Anglia, extendable ears — but by far, the most awesome thing he owned was his invisibility cloak. Who hasn’t longed for the ability to disappear into their surroundings? Cops and soldiers and spies, yeah, yeah. But what about that lame-ass networking event? You wouldn’t even have to pull off your name tag first to ghost outta there.

A new, chameleon-inspired breakthrough might make invisibility cloak-aided escapes a reality. A team of researchers at the University of Central Florida just announced that they’ve developed the first “full-color, flexible, thin-film reflective display,” whose surface color can be changed simply by applying voltage.

Essentially, what Professor Debashis Chanda led his team to create was a “skin,” inspired by the biology of color-changing animals such as chameleons, octopuses, and squids, that could function as a stretchable, wearable display — a departure from the stiff, bulky screens on our phones and TVs. His flexible display, like animal skins, don’t require an external light source such as LCDs or LEDs. They just reflect the light around them.

Close-up the “skin” looks like a thin layer of liquid crystal sandwiched between two metallic nano-sheets shaped like egg cartons. This egg carton absorbs some wavelengths of light and reflects others onto the surface — this is the “color” we see on the flexible display. Running voltage through the liquid crystal determines which colors are reflected to the surface.

The display can show a full range of color, a breakthrough in the field. It’s also only a few microns thick, making it flexible enough to wear. Printing the reflective surface was cheap and inexpensive; realistically, we could see a consumer version before long.

“This is a cheap way of making displays on a flexible substrate with full-color generation,” Chanda said. “That’s a unique combination.” Of course, this not only has huge implications for any products that currently use a screen, like laptops and tablets, but it also may revolutionize what we put screens on. The possibilities are endless. Who knows what we’ll see — or not see — next?

More like this
Science
8.14.2022 1:00 PM
'Gifted' dogs may share this one personality trait. Does your dog have it?
By Tara Yarlagadda
Science
8.10.2022 3:00 PM
Watch sea sponges sneeze out stringy mucus in slow motion
By Jennifer Walter
Science
8.9.2022 10:30 AM
Is my dog depressed or happy? Pet experts explain how you can tell.
By Tara Yarlagadda
Related Tags
Share: