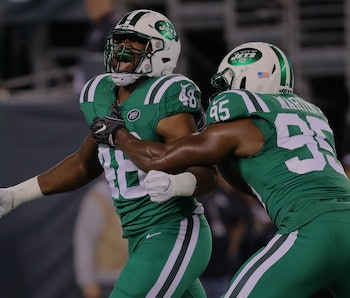 The New York Jets snapped a three-game losing streak with a big win over the Buffalo Bills. The Tampa Bay Buccaneers have lost five in a row and are staring long and hard at a lost season. A hive mind of about 40 NFL fans predicts the Jets will win Sunday.

Where the two teams are at is a bit of a reversal of expectations. The Jets were expected to be absolutely putrid, if not outright tanking, yet they have scuffled their way to a decent 4-5 mark. The Buccaneers were meant to be at least at that general level of mediocrity, but their season has fast spiraled out of control, with quarterback Jameis Winston looking little like a supposed franchise centerpiece.

To predict the result of this and other games, Unanimous A.I. used what’s known as swarm intelligence to forecast the week’s slate. More than 30 NFL fans worked together as a hive mind to make picks. As you can see in the animation below, each participant controlled a little golden magnet and used it to drag the puck toward the answer they thought was the most likely outcome. As the users saw the puck move toward a particular outcome, it triggers a psychological response. They readjust their decision-making, building toward a consensus. Here’s Unanimous A.I. founder Louis Rosenberg explaining swarm intelligence at a recent TEDx Talk.

The swarm doesn’t hesitate to pick the Jets here, albeit with low confidence — still, 89 percent brainpower suggests a high level of unanimity.

The hive mind likes the Jets to win by four to six points, with 84 percent brainpower behind that prediction. Vegas currently favors New York by 2.5 points against the spread.