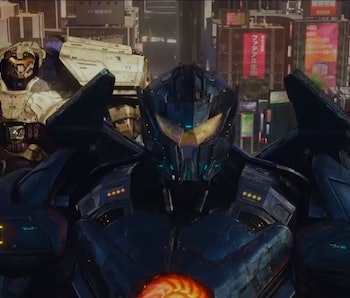 It looks like we won’t see Pacific Rim’s Jaegers alongside Godzilla and King Kong, after all. Though Pacific Rim Uprising director Steven S. DeKnight excited fans when he suggested that the franchise could crossover with the MonsterVerse, the film’s producer says that’s not going to happen.

On Thursday, CinemaBlend posted an excerpt from their interview with Cale Boyter, where the Uprising producer said that “There’s no plans to merge.”

However, it’s not all bad news. “Understandably that might be cool,” Boyter said, “but I might have something up my sleeve that will surprise you - that I think you guys will love, that I think is better than the obvious approach.”

The original basis for the speculation that Godzilla and King Kong could crossover with the Pacific Rim universe was that they shared a production company in Legendary. However, this was always a little unlikely, as it would involve coordination between the film series’ current production companies.

Even though Warner Bros. ended their partnership with Legendary in 2013, they have a deal with Legendary to help with development on the MonsterVerse films. And instead of Warner Bros. being the producer on Pacific Rim Uprising like they were with the first film, Universal Studios is producing the film.

With a crossover between the MonsterVerse and Pacific Rim seemingly off the table, though, what’s left? Looking at film series shared by Legendary and Universal for anything that would be a smart addition to the Pacific Rim universe, nothing stands out, however bizarre and fun it would be to see Kaiju in the place of dinosaurs in a crossover with Jurassic World, if indeed Boyter’s hinting at a crossover instead of some other cool future for the series.

We’ll have to wait until next year to see if there are any clues in Uprising.

More like this
Entertainment
8.16.2022 12:30 PM
Star Wars theory reveals a dark truth about Obi-Wan Kenobi
By Dais Johnston
Entertainment
14 hours ago
House of the Dragon is a worthy successor to HBO’s Iron Throne
By Mónica Marie Zorrilla
Entertainment
10 hours ago
She-Hulk villain Titania could be hugely important to Avengers: Secret Wars
By Alex Welch
Share: