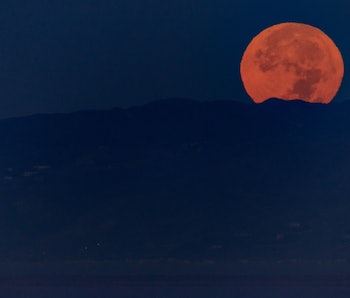 This month’s full moon graces us with its presence, peaking during the early hours of November 4th this week. Affectionately called the “Beaver Moon,” this moon may appear a little bigger and brighter than usual, but it just misses the mark of achieving the coveted status of “supermoon.”

What’s a Supermoon, You Ask?

Although not an official term coined by astronomy’s governing body, astronomers have come to classify a “supermoon” as a full moon that occurs when the moon is at its closest point to Earth during its orbit or “perigee.”

When Can I See the Full Moon?

In this month’s cycle, the full moon will peak at 1:23 a.m. Eastern on November 4th, while the moon’s perigee is a little under 48 hours after that, according to the Farmer’s Almanac.

Will November’s Full Moon Be a Supermoon?

There is some argument in the space world over how close a full moon has to be to the moon’s perigee to be considered “close enough” to be classified as a supermoon. The moon’s closest perigee for this month’s orbit is around 224,587 miles away. When the full moon occurs later this week, it will be around 2,500 miles farther away from Earth, which for outer space, isn’t much at all.

Just last November, the full moon was at its closest position to Earth since 1948, resulting in an especially gigantic moon. The next time a full moon will be even closer? November 25, 2034.

Why Is Called a “Beaver Moon”?

According to the Almanac the moniker for November’s full moon stems from the Native Americans, who noticed that this full moon occurred around the time they would need to set traps to capture beavers for their winter fur coats. The moon was also called the “Full Frost Moon,” as the water would start to freeze over around this time. Seems logical enough.

When’s the Next Full Moon After November?

But all supermoon hope is not lost for 2017. An even bigger and consequently better full moon is going to cruise by Earth next month. December’s full moon will, in fact, result in a supermoon. This moon is known as the Full Cold Moon because, well, you can guess why.

If you liked this article, check out this video of what it looks like to land on an alien moon.

More like this
Science
22 hours ago
What Mysteries is the Universe Hiding from Us? A Cosmologist Weighs In
By M. Mitchell Waldrop and Knowable Magazine
Science
21 minutes ago
How the Webb Telescope is Rewriting What We Know About the Early Universe, One Galaxy at a Time
By Doris Elín Urrutia
Science
Feb. 4, 2023
Astronomers May Be on the Cusp of a “Potentially Revolutionary” Cosmological Breakthrough
By Universe Today and Matt Williams
LEARN SOMETHING NEW EVERY DAY.
Related Tags
Share: