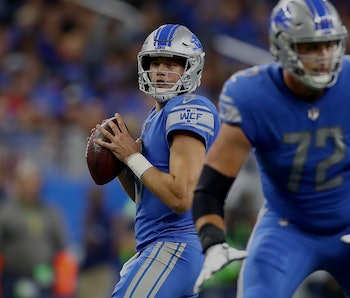 The Detroit Lions have won a single game in Green Bay since Bill Clinton took office. But with star Packers Aaron Rodgers quarterback out with an injury, the Lions have a chance to get another rare victory at Lambeau Field. A hive mind of about 30 NFL fans predicts Detroit will indeed win Monday.

Brett Hundley makes only his second start in place of Rodgers, and his first one didn’t go well: He managed just 87 yards passing last week against the New Orleans Saints. The Lions aren’t coming into Monday’s game in terrific shape, as they are looking to snap a three-game losing streak and have a chance at closing the gap behind the surprising Minnesota Vikings for the division lead.

The hive mind doesn’t feel great about either team, but the eventual pick is Detroit, albeit with low confidence. You can see just how long the swarm hesitates before making that eventual pick, though.

The hive mind likes Detroit to win by four to six points, with 86 percent brainpower behind the choice. The Vegas line is Detroit by 2.5 points, so Unanimous A.I. considers this a bet that is at best worthy of caution.

More like this
Mind and Body
5.7.2022 12:00 PM
Barbell exercises might not work for everyone – here’s what to do instead
By David Rogerson and The Conversation
Innovation
5.16.2022 9:00 PM
Boeing’s Starliner spacecraft takes another shot at the International Space Station
By Claire Cameron
Innovation
5.16.2022 10:30 AM
Bentley Flying Spur Hybrid review: Price, specs, and one annoying thing
By Jordan Golson
Related Tags
Share: