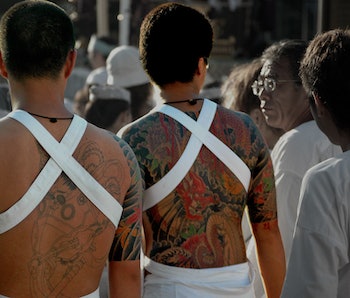 Would-be bank robbers take note: The old pantyhose-on-head trick might not be enough to throw law enforcement of the future off your trail. Instead, you’ll have to adopt Disneyland uniform standards — concealer for everyone! — because that barbed wire neck chain might land you behind bars. Computer scientists, working in concert with the FBI, are developing algorithms to detect and identify specific tattoos. Researchers announced at the Gaithersburg, Maryland Tatt-C workshop that programs are already “extracting information about shapes, features and colours in tattoo photos,” Nature News reports.

The algorithms are young and far from perfect: Tattoos are tougher to code than faces, and even facial-analysis software has its kinks (looking at you, Microsoft’s “How Old Are You?”). Still, the analysis “only needs to provide some investigative benefit to aid in narrowing down suspect lists or providing investigative intelligence related to a crime,” the FBI Criminal Justice Information Services’ Stephen Fischer told Nature.

Those stars don’t seem like such a great idea now, huh, Russian mafiosos?