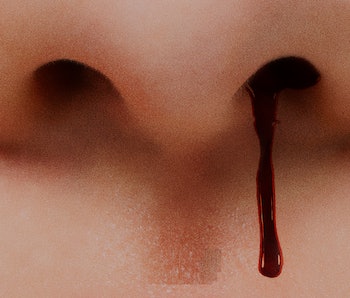 An invisible mist will rise off the sweaty, scared hordes piling into haunted houses and corn mazes this Halloween, hoping to be spooked. As people breathe it in, they may become slightly jumpier and a little more on edge. Chances are, they won’t notice these changes taking place, but there’s no way to to to avoid them. They’re the consequences of breathing in the smell of fear.

Far from being simply a horror story trope and the subtitle to a poorly received 1991 The Naked Gun sequel, the smell of fear is thought to be an alternate form of communication. Animals use these pheromones — chemicals that trigger a social response in other individuals — as their brains go into alert mode when they sniff fear on each other. There’s some evidence that humans use it for similar purposes too, but whether we can actually, consciously smell fear in the air is still up for debate.

Some people may argue that their sweat smells perceptibly different when it’s induced by stress rather than by heat or exercise. Broadly speaking, this is true: The latter kind is made up of mostly benign fluids from the eccrine gland, while stress sweat comprises fluids from the apocrine gland, which contains nutrients that feed stench-emitting bacteria on your skin when you sweat. In addition to sending an obvious signal to others that they should steer clear of you because you smell like B.O., researchers showed in PLoS One in 2013 that the smell of a woman’s stress sweat tends to make the people smelling her judge her as less confident, trustworthy, and incompetent.

But what’s been trickier to study are the compounds in stress and fear sweat that we don’t consciously smell but that trigger emotional responses in our brains anyway. These are the compounds tested in experiments like the one in Psychological Science in 2012, which investigated the way people responded emotionally when they smelled fear sweat. In this particular experiment, the scientists took sweat from the armpits of men who had just watched scary clips from The Shining and had women sniff it. As they did so, the womens’ eyes opened wide, as if they were frightened. Similarly, the sweat from men who watched disgusting clips from Jackass elicited a disgusted response from women who smelled it. These observations led the Utrecht University scientists to conclude that there are chemicals in human sweat that convey emotion that we might not consciously perceive.

In a similar study published in PLoS One in 2009, a team including Bettina Pause, Ph.D., a pioneering smell-of-fear psychologist at the University of Düsseldorf, showed that people who smelled sweat from stressed-out students anticipating an exam had higher-than-normal activity in the brain regions involved in processing social emotional stimuli and empathic feelings. Notably, the researchers noted that “the participants could not attentively differentiate the chemosensory stimuli” — that is, they couldn’t smell the chemicals that were so actively stimulating their brains.

It’s thought that humans, like animals, evolved fear- and anxiety-related pheromones as a way to non-verbally convey warnings — say, of an imminent attack by predators — en masse. As Pause wrote in a review in Hormones and Behavior in 2015, “the likelihood of group survival can be increased through the use of stress-related chemosignals. Stress-related chemosignals induce a stress-related physiology in the perceiver, thereby priming a fight-flight-response, which is necessary for an optimum adaption to environmental harm.”

More recently, scientists showed in Scientific Reports just how crucial the sense of smell is to understanding emotions: In their study on people with alexithymia, a psychological condition in which people have trouble processing emotions, they found that people with severe degrees of the condition had “altered physiological responses to odors.”

This Halloween, you and your friends probably won’t consider fake zombies with chainsaws or Pennywise impersonators popping out from a haunted house sewer as real threats to your survival, but don’t believe for a second your sweat won’t betray your brave face.

More like this
Science
5.16.2022 10:00 AM
Pig-human heart transplants still have a long way to go
By Andrew Fenton, The Conversation and Françoise Baylis
Science
5.14.2022 12:30 PM
Omicron subvariants: An epidemiologist answers 5 essential questions
By Louis Jacobson and Kaiser Health News
Mind and Body
5.17.2022 8:41 PM
Mysterious hepatitis outbreaks in children are confounding doctors — here's why the cause is still unclear
By Katie MacBride
Related Tags
Share: