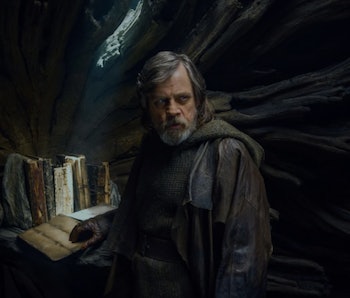 Whether or not Luke Skywalker is turning to the Dark side of the Force certainly won’t be answered in any of the trailers for Star Wars: The Last Jedi, but that’s not the big news from a galaxy far, far away. Instead, we now know one of Luke’s ancient books probably tells the entire story of the galaxy. And that’s because it’s called the “Journal of the Whills.”

On Tuesday, USA Today teased a photo of Luke with his small stash of books in The Last Jedi, and one of them is the Journal of the Whills. This is significant because not only are these the first books ever glimpsed in a Star Wars movie but also, the Journal of the Whills is a metafictional reference to the way George Lucas originally intended to tell the entire story of Star Wars. In the 1997 version of Star Wars: The Annotated Screenplays, Lucas described the Whills like this:

“Originally, I was trying to have the story be told by somebody else (an immortal being known as a Whill); there was somebody watching this whole story and recording it, somebody probably wiser than the mortal players in the actual events. I eventually dropped this idea, and the concepts behind the Whills turned into the Force. But the Whills became part of this massive amount of notes, quotes, background information that I used for the scripts; the stories were actually taken from the Journal of the Whills.”

Of course, the concept of the Whill was referenced in Rogue One; Baze Malbus and Chirrut Imwe were called “Guardians of the Whills,” which meant they guarded ancient Jedi knowledge. But, because Luke is so despondent in the Last Jedi trailers, it seems as though actually reading some of this material has been a game changer.

Throughout all of the existing Star Wars films, knowledge about the Force seems to be handed down orally. This means, whatever information we have about the Force comes from people who have proven to be unreliable sources (like Obi-Wan Kenobi). In Revenge of the Sith, Palpatine mentioned the Jedi were “dogmatic” in their views about the Force. Perhaps, even though Palps was evil, there was some truth to that, and in reading the Journal of the Whills, Luke has lost his faith, so to speak.

This reveals the most interesting thing about Luke reading the Journal of the Whills: It’s the closest the Star Wars universe has come to creating an analog for the Bible. If the Whills are similar to the immortal beings (gods?) of George Lucas’ imagination, then certain things that were once mysterious about the Force might be explained in more detail.

In other words, the audience — and Rey — think of Luke Skywalker as a myth. But what happens when a myth discovers secrets about his own mythology?

Hopefully, The Last Jedi won’t pull any narrative punches with that answer. Because Luke Skywalker reading a book is truly the most interesting thing the Star Wars saga has done in years.

If you liked this article, check out this video about two huge twists revealed in the Last Jedi trailer.