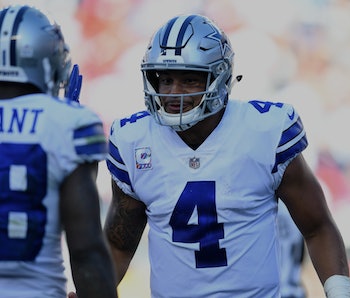 The NFC East has a clear hierarchy: The 6-1 Philadelphia Eagles are at the top, and the 1-6 New York Giants are at the bottom. In the middle, however, are the Dallas Cowboys and Washington, both 3-3. A hive mind of about 35 NFL fans predicts Washington will make a move Sunday, picking them to win.

The Cowboys have won four straight on the road in Washington, and their opponents are dealing with some significant injuries. But Washington so far has only lost to the best, dropping both their games against the rival Eagles and another game to the 5-2 Kansas City Chiefs. That’s about as unblemished a record as a 3-3 team could ever hope to have.

The hive mind is deeply uncertain about this one, taking forever to make a decision. In the end, the home team is the pick here, but only with low confidence and a terrifying low 66 percent brainpower behind the pick.

The addition of a 2.5-point spread does nothing to clarify things. Washington remains the low confidence pick, but now the brainpower is down to 57 percent. This is a game to watch and nothing else, basically.