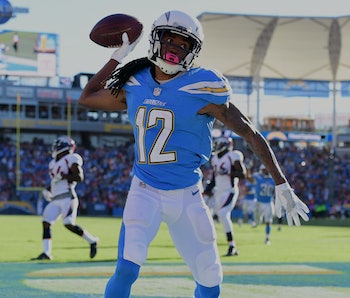 The Los Angeles Chargers have a chance to claw all the way back to .500 at the season’s halfway point by winning their fourth straight game. To do so, they only have to beat the defending Super Bowl champions, as they head to Massachusetts to face the New England Patriots Sunday. A hive mind of about 35 NFL fans predicts the Patriots will emerge victorious.

This season is the 25th anniversary of the only team to start 0-4 and make the playoffs, and the Chargers have to feel at least a twinge of kismet that the team that did it was the 1992 San Diego Chargers. The one big advantage the team brings to their game against the Patriots is a fearsome pass rush, which figures to make life as tough as it ever is for Patriots quarterback Tom Brady.

The hive mind is fairly certain the Patriots will win here, though the confidence level is in question. As you can see, the swarm initially seems to err toward the high confidence pick before paying the Chargers the respect of a low confidence pick for New England instead. The 73 percent brainpower behind the prediction is low.

The Patriots need to win by at least eight points to cover the spread, and the swarm is again uncertain, though this time the split is between a low confidence pick for the Patriots and one for the Chargers. New England ultimately gets the nod, but again 71 percent brainpower isn’t high.

More like this
Gear
11 hours ago
How To Use Google’s New AI-Powered Visual Search
By Jackson Chen
Entertainment
Jan. 31, 2023
Robert Zemeckis Has Found His Latest Tech Tool With AI De-Aging — And That’s Good
By Dais Johnston
Gear
Jan. 31, 2023
Why Mercedes-Benz’s Self-Driving Milestone is a Big Deal for Autonomous Cars
By Jackson Chen
LEARN SOMETHING NEW EVERY DAY.
Related Tags
Share: