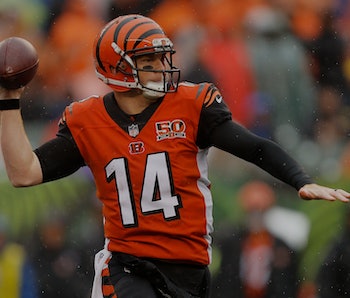 The Cincinnati Bengals are on the verge of scraping their way back to respectability after a disastrous start to the season. The Pittsburgh Steelers are looking to build on giving the Kansas City Chiefs their first loss. A hive mind of about 30 NFL fans predict the Steelers will win their game Sunday.

The Bengals have played their other two AFC North rivals, with wildly different results: a 20-0 season-opening shutout at the hands of the Baltimore Ravens, then weeks later a 31-7 blowout of the Cleveland Browns. The Bengals look to have fixed some of their early offensive woes, while the Steelers have been all over the place, beating the Chiefs while also losing to the Chicago Bears.

The swarm likes Pittsburgh to win here, though it’s probably best described as a medium confidence pick. The split between high and low confidence kept the collective brainpower at 73 percent, which is low, but very few are picking the Bengals.

The addition of the five-point line doesn’t alter things too much — this time, though, it’s a low confidence pick with 76 percent brainpower behind it.

More like this
Innovation
8.5.2022 11:00 AM
Alexa could diagnose Alzheimer’s and other brain conditions — should it?
By Joanna Thompson
Mind and Body
7.27.2022 2:00 PM
Too hot to run outside? Sports scientists share 7 tips to break a sweat safely
By Ash Willmott, Justin Roberts, Oliver Gibson and The Conversation
Innovation
7.29.2022 2:00 PM
Amazon's new invention could let you “speak” to the dead — but should it?
By Sofia Quaglia
Related Tags
Share: